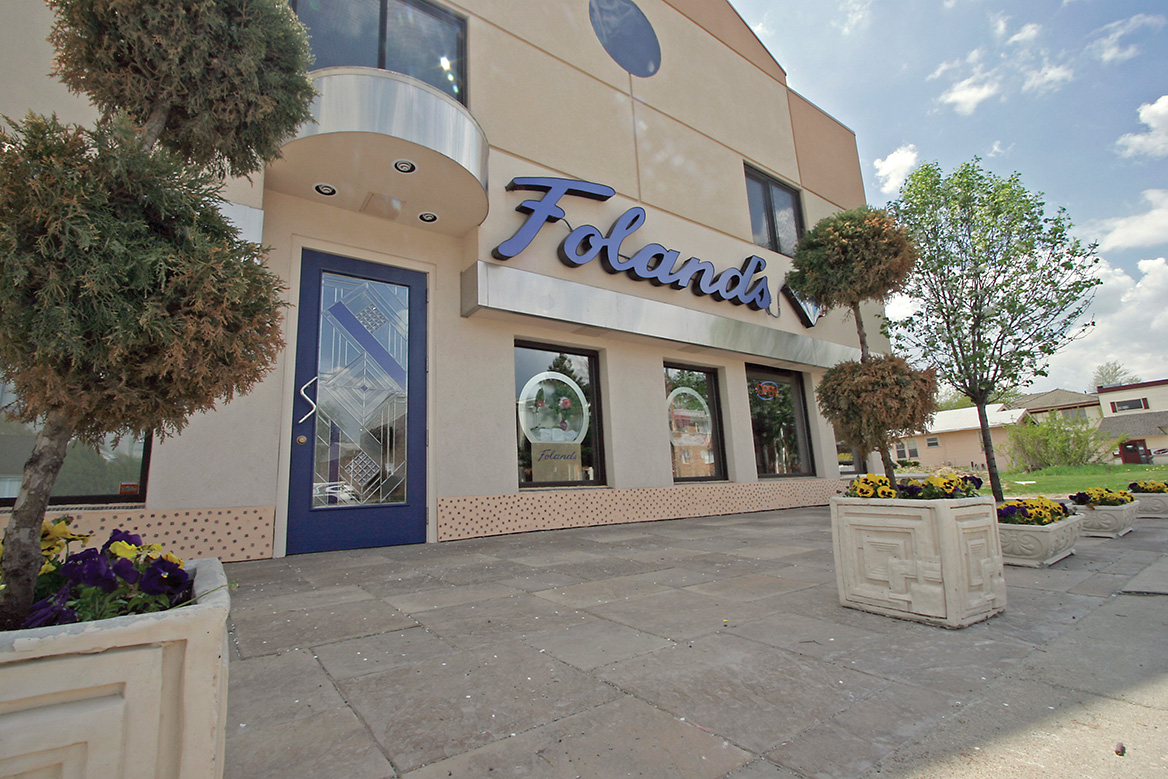 ESTABLISHED, YES. Multi-generational, sure. But old fuddy-duddy? Not even remotely. Folandʼs proves that a longstanding jewelry tradition and a knack for innovation donʼt have to be mutually exclusive. In fact, they complement perfectly. Third-generation owner Heather Kroot wanted to keep her store name — Folandʼs — but evolve it into a stronger, more marketing savvy moniker to help promote a new diamond branding program. An upscale jeweler fully embracing todayʼs diamond marketing trends, Folandʼs offers shoppers a store environment that has homey touches reminiscent of Krootʼs retail roots, deftly combined with modern elements that put the store firmly on the cutting edge.

THE HISTORY
Fur to Foland’s

Owner Heather Krootʼs family history in the luxury business began with her great-grandfatherʼs work as a furrier. But his son, Lawrence Reich, Krootʼs grandfather, decided to take a different path after seeing his father struggle with an asthma condition due to years of working with fur. Reich began work as an apprentice diamond setter who eventually became a self-taught jewelry maker.

Krootʼs father joined her grandfather in the family business and started to expand it. With the hopes of selling large quantities of jewelry, he opened the doors of the first A.J. Foland & Co. catalog showroom in Dearborn, Michigan in 1973. By 1991, A.J. Foland & Co. operated seven stores in Michigan and Ohio.

Catalog showrooms eventually lost favor with the public and A. J. Foland & Co. closed all of its stores in 1992. Foland Jewelry Brokers, selling only fine jewelry, began operating at the location of A.J. Foland & Co.ʼs Warren store in 1992. It was owned and operated by Kroot and her father.

In 2004, the building that the family owned and occupied for 30 years was sold and it was immediately decided that Folandʼs Jewelry would relocate to downtown Royal Oak. The new location meant new clientele, new merchandise and a new way of selling jewelry to mainly “high style” individuals, young families and affluent young singles.

When looking for a new location for her standalone store, Kroot was quick to choose Royal Oak, a burgeoning Detroit suburb with an eclectic and upscale retail area of specialty shops. The suburbʼs young and diverse population made it market-ready for Krootʼs vision to create an upscale but not intimidating retail environment that would be the backdrop for her new diamond branding program.

To achieve this, Kroot converted the interior and exterior of the existing building. Trendy exterior elements — such as a mural painted to frame her large outside LED screen flashing images of jewelry, gift items and logos — is visible from blocks away. A custom-built stained glass door and rounded display windows let her market know that this is a new kind of jeweler, the familiar name of Folandʼs notwithstanding.

Exterior and interior design elements come together to reinforce the storeʼs upscale and urban panache. But despite the modern flair, a sense of Midwestern warmth embraces customers. The experience includes wood floors, area rugs, and a “living room,” complete with comfy furniture, a fireplace, a large screen TV and refreshments.

Krootʼs mother, the interior designer who designed all of the Folandʼs stores, took on the task of completely modernizing the space, previously an art gallery. “My favorite feature in the store is that everything is modern and up to date, yet comfortable in cozy traditional ways,” says Kroot.

THE STORE
Feeling at Home

From the moment a customer walks on the new slate “courtyard”, touches the handle of the custom-made stained, leaded glass door, and enters the vestibule with its Art-deco lithograph of a lounging bejeweled woman, Folandʼs distinctive domicile qualities give a homey feel that continues on through the store.

A camel-hair color scheme was chosen to give a sense of warmth to the store. Cobalt blue accents offer a nice complement. In the main showroom, a long, multilayered cobalt blue and hand-painted wall meets a shorter wall, where the illusion of large vertical bands of different colors are actually alternating glazed and unglazed surfaces.

Near the diamonds and bridal section is a large backlit diamond flanked by two duratrans, promoting key merchandise. Another cool wall feature is the seven variously-sized rectangular shadow-box display cases, each containing colored iridescent balls that are draped with special, highlighted jewelry items.

By retail averages, Folandʼs 9.5 foot high ceiling definitely qualifies as “vertically challenged.” Building codes forced the use track lighting, but the Kroots made the most of a compulsory design element to not only illuminate her store and its display cases, but also reinforce its sense of comfort. The track lights were combined with standard ceiling light fixtures to provide the right combination of illumination and warmth, which was one of the Krootʼs bigger challenges in designing the store.

Kroot is most pleased with some of the storeʼs small touches — like a living room-inspired seating area where customers can watch a movie, warm their feet near a fire place and sink into comfy chairs or the equally inviting sofa. Folandʼs bathroom was also turned into a signature space, with its cobalt blue vessel sink mounted on a granite-topped wood cabinet. The private diamond presentation room is another room where Krootʼs deft design touches show with purple chairs, a custom desk and special lighting to highlight diamonds. Thereʼs also a couch — allowing for comfortable, relaxed conversations with clients.

THE TECHNOLOGY
Building a Brand

One of the key differentiating aspects of Folandʼs is the storeʼs own line of branded diamonds — called Folandʼs Fire. These diamonds are selected with the help of Overseas Diamondsʼ Isee2 technology — which allows for more stringent diamond grading that jewelers can use to market superior diamond cuts under their own names. To help grade these diamonds, as well as show customers the advantages of Folandʼs diamonds, iMacs are placed throughout the store.

In another area of the store, a flat plasma screen serves the dual purpose of educating and entertaining. For those interested in the storeʼs 32 lines of jewelry (including names such as Hidalgo, Verragio, Judith Ripka and watches by Maurice Lacroix), there are product videos. And, for visitors who arenʼt interested in jewelry, thereʼs always the living room — which is stocked with enough DVD titles to keep them busy.

THE PEOPLE
Training to Win

Developed from her years of experience, Krootʼs business philosophy is based on complete honesty. Her goal is to educate customers while making them feel comfortable in the process. In team members, Kroot seeks professionalism and honesty — and also a modern sensibility to match best with the many young urban professionals in her market.

As the flame behind Folandʼs Fire, Kroot believes strongly in training her staff. She personally handles most of her storeʼs training and is constantly seeking new ways to help better educate and enrich her team membersʼ jewelry knowledge.

In the meantime, Kroot continues to promote her new storeʼs name in innovative ways. Thereʼs not only the big mural and the flashing LED sign. Kroot is heavily involved in local charities — including the Special Olympics and efforts to rebuild coastal areas ravaged by last yearʼs tsunami in Southern Asia. And for those who would worry that all work and no play might make for a dull jeweler, Kroot is also developing a martini to be sold at local eateries. What does she plan to call it? Folandʼs Fire, of course. 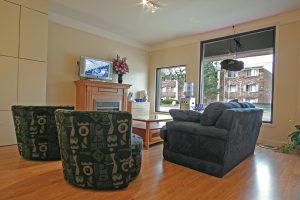 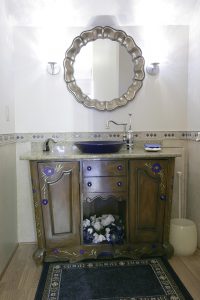 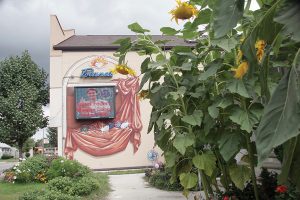 Related Topics: Foland’sjewelry stores in Michigan
click to Comment(Comment)
Up Next