It’s the first drop in 3 months.

Independent jewelers moderated their assessment of the short-term outlook for their businesses in October, with the INSTORE Jewelers Confidence Index falling to 52 from 55 in September.

The decline marked the first drop in three months and was most noticeable in the South, where only 28 percent of jewelers said the outlook for their stores had improved in the past month, and 53 percent said they were planning to order less in October than they had in the same month last year. Parts of the South were, of course, hit hard by Hurricanes Harvey and Irma in September.

In other parts of the country, conditions look to be shaping up nicely for jewelers as we move toward the key holiday season. Thirty-nine percent of all jewelers surveyed said their sales were Up or Way Up in September compared to the same month in 2016 and most wider economic indicators continue to improve.

Jewelers’ optimism continued to outpace their stock purchases, however, with almost 45 percent of the 220 survey respondents saying they had ordered less jewelry compared to the same month last year even though only 18 percent thought the outlook for their stores had deteriorated. Those two factors – outlook and actual orders – form the basis of our index. A score above 50 implies jewelers are generally positive about the immediate future of their businesses.

Related Topics:Jewelers’ Confidence Index
click to Comment(Comment)
Up Next

Jeweler Admits to Fraudulent Sales, Could Face 18 Months in Prison

He operated the House of Kahn.

Edward Kahn of estate jewelry company House of Kahn has died at age 103.

CBS Chicago reports that Kahn was one of the oldest Holocaust survivors.

He built House of Kahn, which has locations in Chicago and Palm Beach, FL, with his wife, Adele. Just six weeks ago he made public his plans to retire, with his daughter Tobina Kahn to take over the business.

Kahn came to the U.S. 6- years ago from Romania, having lost his parents and sister to the Holocaust.

Customers will get refunds for jewelry they bought during the holidays.

An Idaho jeweler that held a “snow promotion” will be refunding its customers for jewelry they bought during the holiday season, KREM-TV reports.

Clark’s Diamond Jewelers in Couer D’Alene, ID, wrote in a Facebook post Monday that it had “received notification from the insurance company that our policy has been officially accepted and the award will indeed be paid out!”

The claim had originally been denied. Weather Command, a verification firm that works with the jeweler’s insurer, at first said snowfall on the date in question had been less than the required amount.

The store had vowed to fight for approval, believing that snowfall had indeed exceeded 3 inches.

New List Reveals the ‘Most Common Birthstone in Every State’

The analysis comes from Shane Co.

A new ranking from Shane Co. looks at the “most common birthstone in every state.”

In a blog post on its website, the company explains that it “used the latest CDC natality data to determine how many people are born each month in every state.” From there it was able to identify the most and least common birthstones in each state.

Peridot, the birthstone for August, “ruled the map,” emerging as the most popular stone in 40 states, including New York and California. Other birthstones are emerald, ruby, sapphire and opal. 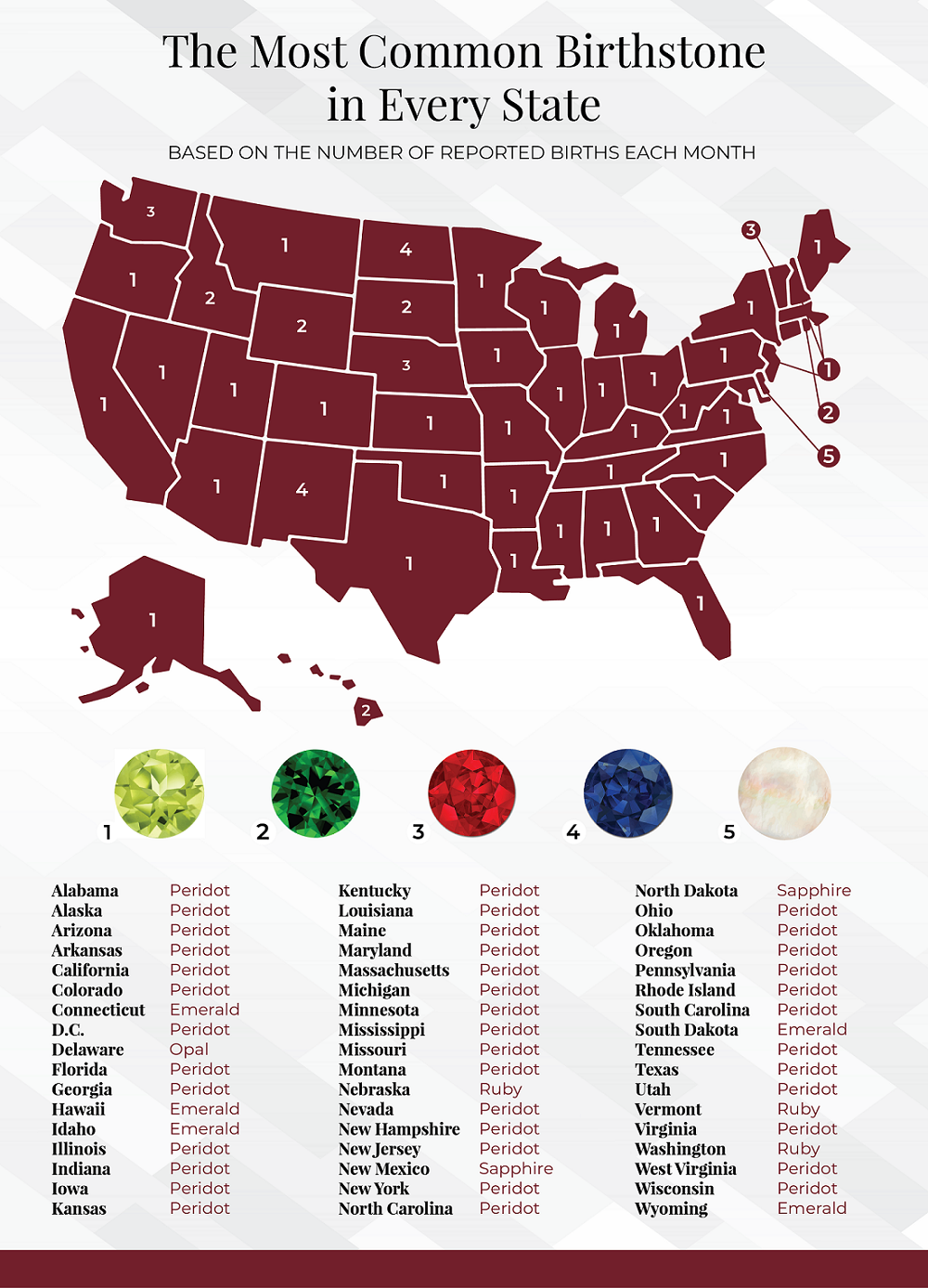 Crescent Horns-Style Pendants Continue to Provide a Shape for Designers

From Over-the-Top to Shimmy Shakers, These Are the Latest Designs in Fashion Jewelry

10 Oscar Jewelry Trends That Translate for Your Customers