(PRESS RELEASE) OMAHA, NE – After a tough year, the winner of Borsheims Big Ring contest now considers herself lucky. Lori Miller had lost the stone out of her diamond ring and dealt with a number of family health crises but was thrilled to find out she won a $5,000+ diamond ring by ringing bells for the Salvation Army. She was announced as the winner in the middle of Borsheims and presented with the ring to the applause of the gathered crowd. 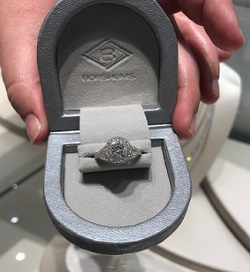 The Borsheims Big Ring contest allowed people who rang bells as part of the Salvation Army’s red kettle bell ringing campaign between Nov. 11 and Dec. 23 to enter to win a new diamond engagement ring from Borsheims. The ring is a 14k white gold round diamond double halo ring from Borsheims that retails for $5,395.

Miller, from Blair, NE, says she lost the diamond from her original wedding setting this year as she and her husband were celebrating their 15th anniversary. In addition, her husband was in a car accident and endured five operations this year and is just returning to work. She was thrilled to be named the winner of the ring, but never dreamed of winning the ring. Instead, she decided to ring bells for the Salvation Army with her two boys to show them how to give back to the community.

Salvation Army officials say the campaign with Borsheims helped inspire more people to sign up for bell-ringing shifts. This year, with the help of the Borsheims Big Ring contest, nearly 93 percent of bell-ringing shifts were filled with volunteers, compared to only 73 percent two years ago, before the promotion with Borsheims started. The money raised from the Red Kettle campaign goes to The Salvation Army’s human need fund, helping with food, housing, youth development and other social service needs.

Borsheims President and CEO Karen Goracke said, “We love being a part of this wonderful effort by The Salvation Army. Our employees join in the bell-ringing fun, volunteering to ring more than 35 hours at our busiest time of year. We are so happy to see Ms. Miller win and hope the new diamond ring brings her and her family much joy.”

Borsheims Fine Jewelry and Gifts is part of the Berkshire Hathaway family.

Lori Miller, second from left, is presented as the winner of the Borsheims Big Ring contest.