Building The Store: Biting the bullet and going to the bank for a loan

Amber Gustafson was pleased with the expansion of her store, — begun in July 2011 — which had doubled her square footage and allowed her to hire a fourth jeweler for her full-service jewelry store in Katy, TX. But by October, she knew she had to begin figuring out how to locate and pay for cases to complete her new look in time for Christmas. She wanted to replace her outdated white cases and install sleek new cases with a dark laminate finish.

Published in the April 2012 issue

By October, Gustafson had given up on finding used cases she could install in her expanded showroom without having to pay for refurbishing. Not that she had given up easily.

“I tried to put the word out on the IJO chat channel, I asked salespeople who walk in my door, trying to find used cases,” she said. “I had a few possibilities come in and they sent me photos, but all were dated and needed lots of work, or there were not enough of the same type,” she says. Others — with marble tops — were too heavy to haul from out of state.

“I knew I needed to bite the bullet and get them made if I wanted them to be consistent,” she says.

For the first time in the history of her business, Gustafson decided to get a loan from the bank because her budget seemed destined to double from the original $15,000 or $20,000 to around $35,000. “These things are done slowly when you pay as you go. I didn’t get where I am by overextending myself. So I put it off, but I’d be a fool not to put something nice in my store now.” 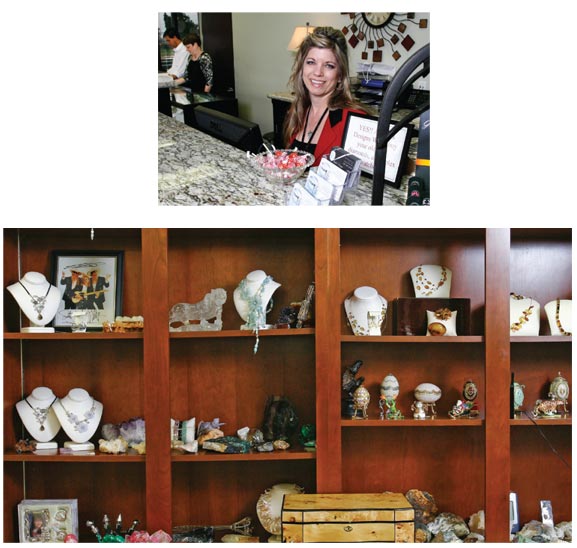 Finally, she decided to have old Bailey, Banks & Biddle cases completely refurbished by Fixtures International of Houston. Four original cases of hers were refinished in black to match.

Gustafson expected the cases to be installed before Christmas, but some were ready before and some after. She had a good Christmas, regardless. “The price of business is costly, but when I think of how much more money will go out of the cases because what is in them looks more beautiful, it’s minuscule.”

THE BUDGET
The original budget was $15,000 to $20,000. That covered the actual construction project. But she had to move the alarm system and put in tile floors. Refurbished cases cost another $16,000, bringing the total budget to about $35,000. She borrowed $20,000 for two years, charged the cases on her credit card, and says now, “Thank goodness, I had a good Christmas.”

DETAILS
She left the fluorescent lights in the ceiling but updated her case lighting to LED.

While Gustafson likes the store’s elegant new look, she doesn’t want it to feel stuffy or pretentious. She ordered two $400, multicolored chandeliers from Lamps Plus online for a touch of fun. She was still shopping for blinds in January and wanted them installed before the planned Feb. 9 open house.

(NEXT MONTH: The Open House )