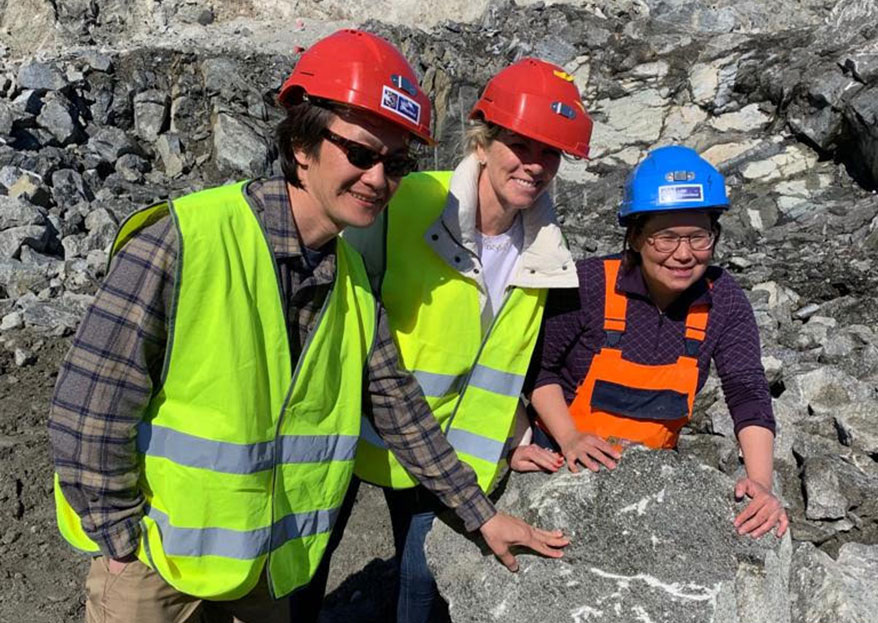 Greenland Ruby VP Sales/Marketing Hayley Henning met with U.S. Ambassador to Denmark Carla Sands (r.) while both were visiting Greenland, to show the ambassador a selection of rubies from Greenland Ruby’s mine. Ambassador Sands counts Greenland as part of her diplomatic duties, since it still a constituent country of Denmark, and requested a meeting to learn more about the mine.

(PRESS RELEASE) As the United States works diplomatically to increase its political and economic presence in the Arctic region, the first ruby mine in Greenland played a role.

In May, the U.S. government announced it was creating a diplomatic presence in Greenland for the first time since 1953, to enhance political and commercial ties to the island, which is rich in mineral resources. It appointed Sung Choi as the new U.S. Greenlandic Affairs Officer, and one of his first official duties was to tour Greenland’s only corundum mine.

Greenland Ruby VP Sales and Marketing Hayley Henning flew to Greenland to lead the delegation to the Aappaluttoq mine, which is located about four hours south of Nuuk, the country’s capital.

“Greenland Ruby was delighted to show Greenlandic Affairs Officer Choi our state-of-the-art mine and processing plant, which adheres to the strictest environmental laws and regulations,” says Henning. “He indicated that increased business between the U.S. and Greenland was extremely important to his mission.”

Greenland, which is physiographically a part of the North American continent, is progressing towards self-rule, but is currently still a constituent country of the Kingdom of Denmark. According to the U.S. Embassy in Denmark’s website, Greenland’s significant mineral deposits, along with corundum, include rare earth elements, uranium, and other critical minerals.

The U.S. also notes “a continuing significant disappearance of surface ice from the island.” It says if the trend continues, mining industry experts anticipate the retreating ice will make the island’s raw materials more accessible.

In response to the climate change that Greenland is experiencing, Greenland Ruby has also founded the Pink Polar Bear Foundation to support international polar research in all disciplines, focusing on the contribution made by research to understanding the mechanisms driving climate change and its effects on Greenlandic life and the environment.

While in Greenland, Henning also met with U.S. Ambassador to Denmark Carla Sands, who was visiting the island. The ambassador wanted to see gem material from the ruby mine, and Henning was able to show her an assortment.

Greenland Ruby is part of the LNS Group, a Norwegian, family-owned company that handles mining contracts, road projects, bridges and tunnels in arctic regions. LNS was awarded its mining and exploration license by the Greenlandic government in 2016. Its sales and marketing offices are in New York.

Greenland Ruby officials will be at the JCK Show in Las Vegas at the Venetian Sands Convention Center, at the L-131 booth on Level 1 outside the Global Gemstones section and across from the escalators to Level 2 and JCK Luxury.

At this booth, interested jewelers, designers, and brands can learn more about Greenland Ruby’s responsibly sourced, tracked and traceable gems, and certificates of origin. There will also be a pink polar bear on display, made completely out of ice, for visitor selfies, and a selection of gems set in jewelry from Greenland Ruby’s collaborations with designers and brands.

For the first time this year, Greenland Ruby will also be selling its loose rubies and pink sapphires at JCK Luxury, Booth LUX1027. The gems come in myriad faceted and cabochon shapes and include many qualities and colors. Gems are available in assortments for jewelry lines as well.