WITH A DOWNTOWN FLAGSHIP store and two mall locations, Toby and John Joseph had big plans for their next store — which they determined would be the company headquarters of their rapidly growing business.

A new 1.3 million square-foot lifestyle center seemed the perfect place to build their latest store. Directly off I-35, it’s a location seen by 44,000 motorists each day — not a bad way to further brand an operation that’s been serving Des Moines for over a century. Positioned on a 1-3/8 acre lot, the 18,500 square-foot store possesses traditional prairie warmth that’s offset by contemporary design features, influenced by none other than architectural legend Frank Lloyd Wright. Curved lines and design elements both outside and in pay homage to the architectural legend.

THE HISTORY
Workin’ on the Railroad

Solomon Joseph started S. Joseph and Sons in the Kirkwood Hotel in Des Moines in 1871. His reputation as a meticulous jeweler and watchmaker earned him the title of designated watch site for the local railroad. Timers and other railroad employees were instructed to bring their watches to Solomon to keep them clean and calibrated.

As the 20th century turned, Solomon expanded his inventory to include fine jewelry and diamonds. He even sold license plate tags and eyeglasses. Down the decades, Josephs began to build its reputation on diamonds, a cornerstone of the company’s success. The firm grew to five stores in Iowa and surrounding states. In 1924, they moved the main store to the then new Equitable Insurance Building.

In 1919, Solomon’s son, Burton, moved to Iowa and joined his two brothers, Jacob and Morris, in the family business. Jacob and Morris died in the early 1930’s during the Great Depression. Their surviving wives preferred cash over jewelry stores as part of their estate settlements, which forced Burton to sell or gift all but the Equitable Insurance Building location.

With only the original downtown location, Burton’s son William Joseph joined the family business in 1939. Meanwhile, his other son, Burton Jr., decided to practice law and then joined the Navy in the wake of the Pearl Harbor bombing. After World War II, Burton Jr. continued to practice law in Houston and got married. But a year later, he heard the call, this time from his father asking him to report for duty at the family store in 1948.

After a number of good, successive years, Josephs opened another store in the Merle Hay Plaza in 1959. The plaza became a mall in the 1970s, one of the largest shopping centers of its kind west of the Mississippi River.

As the family business thrived, Burton Joseph III (“Toby”) began working for the store after college in 1973. A decade later, his brother, John Joseph, joined him. By 1991, the brothers decided to open a new store in the Valley West Mall. When the new West Glen store opened in June 2005, the Merle Hay Mall store was closed. Today, Josephs Jewelers has their original downtown location, the Valley West Mall store and its brand-new West Glen store.

When John and Toby went site-seeing for a new location, it was nothing but dirt roads and expansive flat land, ready for development. In early 2003, they were told that the spot they were standing on would be seen by over 44,000 motorists a day, or just under 10% of Des Moines population of 500,000. The new 1.3 million square-foot lifestyle mall would have plenty of room for business and residential space, retail as well as art galleries and restaurants. A gated community and golf course are just across the street. The Josephs knew this was the place.

They also knew it was time to upgrade their look while maintaining some elements of their history. After surveying retail stores in the area, John and Toby decided their store would have a warm prairie-style exterior design that would be home to a Midwestern landscape. “Other than that, we didn’t have much of an idea of what we wanted,” says Toby. “We pretty much gave our architectural firm free rein.”

“We took a drive around to tell the architectural firm our likes and dislikes,” Toby recalls. “We held several meetings to determine what would fit and not fit in our plans for the store. What really helped us make the final decision was the 3-D rendering of the floor plan, which made it easy to tweak plans throughout the approval process.”

Wright’s influence is most evident where exterior design elements are ushered in to the interior. For Josephs’ West Glen store, this meant small squares, which have aesthetic as well as practical applications. Glass bricks and windows are repeated in interior features such as frosted glass accents on display cases and interior walls. The store’s light cream-colored white stone exterior is also echoed in the store’s limestone entryway, fireplace hearth and some interior walls.

But one of the biggest challenges in approving the final plan was making exterior and interior design elements work around the store’s actual placement on the 1-3/8 acre lot. Throughout 90% of the year, Josephs boasts plenty of indirect sunlight, ideal natural light for viewing jewelry. Plus, the store’s large bay windows offer money- saving passive solar benefits. “In the late fall and early spring, we get some intense direct light,” says John. “But for most of the year we have very good light and we have the other benefit of having passive solar heating in the winter.”

THE STORE
The wright Stuff

With a sizeable plot of land, the Joseph brothers had the pleasure of making choices not all jewelers have, such as creating 51 parking spaces. The spacious lot also afforded the brothers to do attractive landscaping, including a small babbling brook that is home to fish — weather permitting. “Customers seem to like it,” laughs Toby. “We’ve had four gentlemen propose to their fiancées in front of that water feature —
one of whom was my son Jake.”

Josephs does windows — lots of them. From huge bay windows off the showroom and large utility windows in other areas of the store, there’s no shortage of indirect sunlight. Small windows are mostly for aesthetics but have a dual purpose. In addition to letting in more natural light, the small windows act as spacers between display cases behind the store’s main jewelry counter.

When adopting Wright’s design elements into the store’s building plan, Toby and John wanted to take some hard lines out of Wright’s prairie designs and replace them with curves and smoothed edges. In addition to curves meeting lines and intersecting verticals, the exterior buttresses constract cream-colored white stone with brick. And, the same textured brick is used inside. “It’s so smooth it won’t even scratch skin or snag a sweater,” says Toby.

The white store exterior is transferred in to the store’s showroom with cream colored limestone that forms the main aisle. A 6’ x 4’ store logo done in gray marble is a clever transition to the carpeted main sales counter at the rear of the store.

Beige, dark brown, pine green, red and gray colors were selected to coordinate other color elements in the store. The sturdy commercial mill carpeting has five different looks to compartmentalize the large store. Small square carpet patterns and patchwork rectangles mimic other boxy design elements. For a masculine touch and comfort, the Josephs opted for tightly compressed corkboard for flooring in front of the watch counter.

The Joseph brothers decided on display cases with cherry wood curved case lines accented with unusually large, recessed 6-inch high baseboards. The end result is alternating bands of color. The museum cases are limestone and cherry wood, but both include recessed squares as part of the overall design scheme.

The West Glen store’s 18’ to sometimes 25’ high ceilings presented unique challenges to avoid the appearance of a jewelry warehouse. One of the few design elements transferred from another Josephs store was the sculpted ceiling from the downtown store. It starts in the store’s entryway and is about one-third the length of the main aisle. Large circles, 6-ft. in circumference, allow natural light to fall on the showroom floor. These circles also absorb sounds and take up lots of open ceiling space.

The metal halide lighting also helped with ceiling issues. Blue museum style lights drop a few feet below the track lighting over the display cases. “We get a lot of comments on the store’s lighting,” says John. “We’ve heard customers comment that their eyes really don’t look past the lights.”

A new store calls for the latest technological goodies — or at least, that’s what the Joseph brothers decided. A T-1 Internet connection makes it a Net-savvy store online and on Main Street, as evidenced by Josephs’ Flash animation website. All three Josephs stores are connected via a LAN system with a more sophisticated corporate internal system in the works.

Each sales island at the West Glen store has its own computer, including the watch and giftware areas.

Because of the store’s large size and multiple floors, an advanced wireless network phone system was installed to avoid the necessity of a paging system in such a large store. Instead, the store’s 19 salespeople each have their own mobile phone. “We ask that each person keep their phone in vibrating answer mode,” says John. “If they’re with a customer they simply let the call go to auto-forward or their own voice mail.”
The store’s eight jewelers and watch repair personnel have their share of tech toys. Jewelers use CAD/CAM software from Gem Vision and also have the latest in laser welding technology from Crafford-LaserStar Technologies Corporation.

For a jewelry store in a small Midwestern town, Josephs has one of the largest accredited jewelry retail staffs in the nation: 18 American Gem Society accredited jewelers, including eight Certified Gemologists and one Certified Gemologist Appraiser. “My grandfather was one of the behind-the-scenes people who helped found the AGS. He strongly believed in ethics and knowledge,” says John. “Be it diamonds or colored stones, we require that our staff be registered jewelers or certified gemologists with the AGS.”

The result is an appreciative body of customers. “We often hear that our staff is very professional as well as being knowledgeable.” The Joseph brothers also believe that sales should always be about the customer’s needs, not the salesperson’s commission. “For that reason, all sales staff are paid hourly,” says Toby. “This takes the ego out if it.”

Josephs also prides itself on the wide range of ages in its sales staff, which ranges from 22 to 65 with a median age of 35-50. “This way we can appeal to most customers, be it new bridal customers or clients that have been with us for many years.” 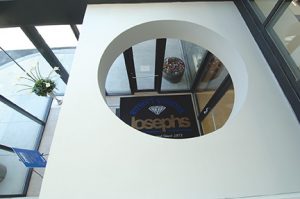 Related Topics: jewelry stores in IowaJosephs Jewelers
click to Comment(Comment)
Up Next