You're working harder these days, and you've got some crazy stories to tell.

You’ve barely aged at all in the last few years, although you are now more likely to be seen wearing high heels and a skirt. You also still work long hours (probably too long) and you’re often the life of the party, thanks partly to your oddball customers.

COMMENT: The number of women owners or managers has been steadily rising since we started doing these surveys more than a decade ago. The first time we specifically asked about gender, in 2009, the split was 65/35. For the record, 43% of the thriving jewelers were women, suggesting they are outperforming their male counterparts. That said, it should be noted that male-owned stores overall tend to be older and thus the owners are often comparing those last two years against a historical record that goes back decades.

40. A question just for the men: Check the types of jewelry you regularly wear:

41. How many hours do you typically work a week?

COMMENT: Perhaps not surprisingly there was no direct correlation between hours worked and performance. While the strugglers tended to be over-represented at the lower end of the band, they were also among the jewelers putting in the longest hours (16% of the strugglers were working more than 60 hours a week compared to 12% for the thrivers). Overall, just about everyone was working hard: 58% of the survey respondents reported working more than 45 hours a week.

COMMENT: We’re guessing most of you think the ’70s was the best period for music. 1960 was the most popular birth year for jewelry store owners, followed closely by 1961 and 1965.

43. Entrepreneur’s psychology test: On a scale of 1-5, rate yourself (5 would mean you have a lot of this quality or trait):

Comment: In every field except one, the thrivers rated themselves more highly than the strugglers. That one exception? IQ. 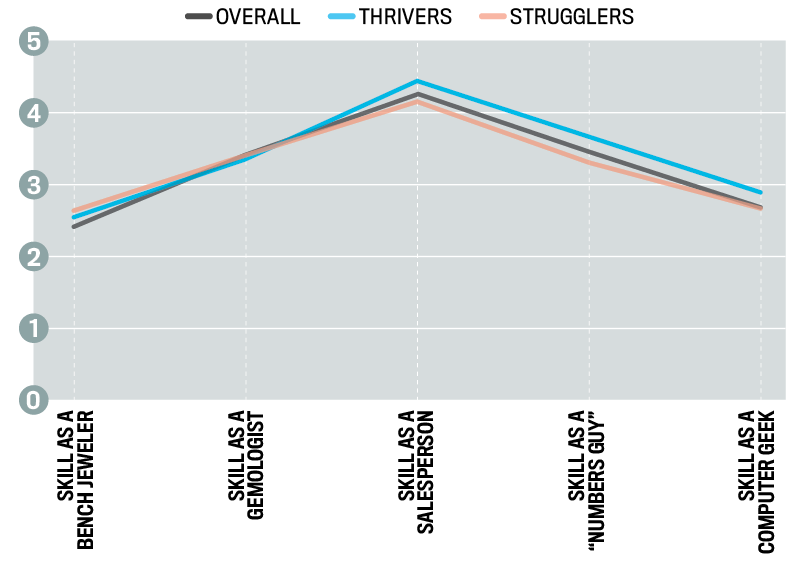 Comment: It’s marginal but interesting: Thrivers claim to be better at sales and numbers, and strugglers to be better jewelers.

45. When you’re at a party or just out and about in your community, do you have a humorous way of describing what you do?

46. Do you have a story that could have ended with this quote … “And I would have gotten away with it too, if it weren’t for you meddling jewelers”?

A customer tried to minimize the value of jewelry in a large estate to cheat the other heirs out of their due value. Our appraisal thwarted that plan!

The husband-to-be who gave his fiancee a CZ (bought elsewhere) who brought it to me to be sized and of course I tested it for the repair envelope. She was angry. He threatened to sue me. He lost a bride-to-be with a seven-figure income. She is a regular client now.

Man buys girlfriend a large diamond ring and gets a smaller one just like it for his wife. Wife comes in to get her ring sized and so does the girlfriend (at the same time) and then the man comes in to pay for sizing and the girlfriend says, “Oh honey, I love my ring” and shows it off. Wife sees the bling and tells me not to size hers as he is buying her a really big ring. Later he comes back and tells us he is planning on taking us to court for causing him to be sued for divorce because we should not have had them both in at the same time. It is all our fault.

Two associates were in the store bathroom discussing a certain customer’s recent purchase for his girlfriend while they were in the stalls. When they walked out to wash their hands, his wife had overheard everything since she was in the bathroom first. Waah, waaanhhhh. Needless to say, he was furious.

I set up a sting and caught a girl who stole a ring from another jeweler in town.

Had a gal come in with three nice diamond rings and wanted insurance appraisals. I had her come back in several hours. She was a flight attendant who had her car broken into at the airport on her last flight. I had another lady call me and asked if so-and-so had brought in her rings (and described them) for an insurance appraisal. I said yes. She then told me that she was going to turn those in on her insurance claim for her car that was broken into. I called the insurance agent and let him know. I’m sure she was not very happy with me.

There was someone selling heavily plated gold, rotating around all the jewelers in the area. For some reason, I was the only one who caught on. I got the entire crew arrested.

A customer had a Rolex stolen. It showed up in a store in a city quite a distance from ours. The owner of the store called us when our town was mentioned to ask if this watch had been reported stolen. Gave us the model number and sure enough it had belonged to a customer who thought she lost it at the Y.

I had a gal come in with a brand new “honking” diamond engagement ring, not purchased from us but needing it to be sized. No way was it a diamond — CZ in sterling silver. She told me it was worth $35,000. I told her it was CZ and silver. She didn’t believe me. I told her to look at it under the microscope at the stamp and we’ll use the diamond tester. She called her fiance right after we did all that and broke up with him. He called me up and told me I shouldn’t have meddled! No way was I touching that hot mess!

Sure. The guy fooling around on his wife who bought an item for the girlfriend but like an idiot gave us the home phone number to call when it was done. Made two sales off this guy!

The day I had to tell a young lady that the center stone in her ring was not a diamond. I am sure her ex-fiance would have said, “And I would have …”

47. What’s the weirdest complaint you’ve had about your service or jewelry?

48. Please complete the following … I knew I’d made it when …

Big Survey 2018: The Best Managers Don’t Get Too Bogged Down in the Details