It was a team effort for Mark Loren Designs.

EACH YEAR, OUR December Real Deal tells a story that helps bring to mind the amazing privilege afforded us by our industry to make a real difference in our communities, and that reminds us why we do what we do. This year, as we wrap up one of the most challenging periods in our history, we are honored to share the story of the Mark Loren Designs family and their amazing effort to make Mother’s Day 2020 a real celebration for moms in their Ft. Myers community.

It was the day that Florida’s governor mandated the closing of all non-essential businesses. Before putting up the security/hurricane shutters and heading home, Mark Loren sat down with his staff to discuss a plan for the coming few weeks, to check in with each person, and to make sure everyone had a chance to express their feelings and concerns about all that was happening. With PPP money in hand, Mark knew that paychecks weren’t going to be a problem in the short term, and he knew that his team was ready to work in any capacity they could, with or without the availability of their beautiful showroom and usual routines. It quickly became apparent that the Mark Loren Designs team was far more concerned with what they could do to help their community moving forward than they were with the immediate reality of a closed store or challenges in their own lives. Their discussion eventually rolled around to the upcoming Mothers’ Day holiday, and to the idea of a “surprise” event similar to one the store had run to benefit economically challenged local families in 2008. It seemed that this year, everyone knew someone who had already been impacted by the pandemic, and others who were living in fear of what might come next.

The team decided that they should create a special Mother’s Day pendant that they would produce in house and make available to people who might not otherwise be able to mark the holiday with a gift for Mom. “We had purchased quite a bit of sterling silver from clients in the past year, so we had plenty of metal on hand — enough by my calculation to make about 200 pendants,” Mark says. He challenged his newest part-time intern Crissy — a talented high school art teacher in her “full-time life” — to come up with a few preliminary sketches, and the team chose the design they would make. Andrea, one of the store’s CAD designers, rendered and milled the master wax model, and Mark and his production team cast three pendants to rubber mold.

“After I cut the mold, members of the shop team would come in for a few hours in a stretch and shoot waxes, while I would cast about 50 pieces at a time. Then the rest of the staff (and even the wife of one of our bench jewelers who was bored out of her mind at home) would come in on alternating schedules and hand-finish the pendants,” says Mark. Mark and his jewelers set the diamonds in each pendant using modified watchmaking equipment, and each piece was hand-signed — a hallmark of Mark Loren Designs. The store’s production manager worked with an intern to order, receive and attach silver chains to the pendants. Then, various team members took the finished necklaces home in groups of 50 to place them in their traditional gift packaging.

It took a remarkable, coordinated effort to produce the special gifts, and the Mark Loren team’s commitment and generosity of time were rewarded when, in a stroke of karmic good fortune, the governor called for the reopening of Florida businesses just in time for Mother’s Day — with a number of important safety restrictions in place. For Mark and team, that meant figuring out how to dress in full PPE and meet guests outside while they remained in their cars. 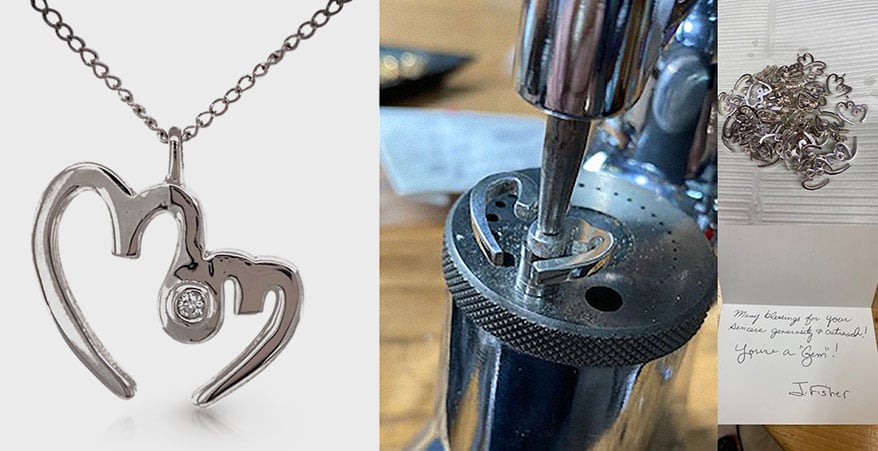 Mark had the store’s PR company put out a press release announcing a very special Mother’s Day happening at Mark Loren Designs using photos and video that team members had taken during the production of the pendants. The visuals spoke volumes, and the local news media was quick to support the effort and help get the word out. The message was clear and moving: If you had experienced hardship or lost your job due to the events of the previous month and wanted to get a nice gift to honor your mother, you could pick up a necklace, made with love, for free — no paperwork and no ID required.

Anticipating a crowd on delivery day (the Saturday before Mothers’ Day), Mark contacted a buddy in the sheriff’s department to ask for help with traffic control. His friend stepped up and brought along some additional volunteer reinforcements from among the ranks. They decided to create a “drive through” lane in the parking lot around the store in an effort to minimize congestion on the main road.

The first car was in line by 7 a.m. for a scheduled 10 a.m. start. By 8:30, the deputies told Mark to begin handing out the necklaces, because despite careful planning, cars were beginning to back up in both directions.

The team at Mark Loren Designs chose to put their efforts toward Mother’s Day pendants for those experiencing financial hardship or loss of employment.

Mark remembers, “We had folks pull up crying because they were so grateful. Folks gave us thank you cards, people came who had moms in the hospital, kids who wanted to pick up a gift for their grandma who raised them, husbands who were out of work that wanted something special for their wives who were moms … really, people from all walks of life , in all manner of circumstance. We even had folks who tried to hand us money through their car window as a donation. I received a handwritten card from one of the deputies who helped us that day. We gave him one of the pendants for his mom. He wrote that she cried when he gave it to her. She had never received jewelry as a gift, ever.”

The Mark Loren Designs staff was front and center through it all, from coming up with the idea to creating the design, to handmaking the pieces, to packaging the gifts — then to meeting their customers, delivering the necklaces, helping with traffic control and handing out bottles of water to people in line… all in the middle of a pandemic that was wreaking havoc on everyone. They count the experience among the highlights of their lives, and all agree they would do it again in a heartbeat.

Related Topics: jewelry stores in Florida
click to Comment(Comment)
Up Next

When a Client Insists a Purchased Watch Is Fake, the Retailer Suffers

How Should This Retailer React to a Former Employee’s Accusations of Employment Discrimination?

Best 2021 Emmys Jewelry: What the Stars Wore to the 73rd Primetime Emmy Awards