Out On the Edge

By incorporating jewelry, IRIS turns the piercing culture on its ear.

STORE MANAGER JAYMES LOMBARDI is the host of the party that is IRIS in Chicago. He keeps the atmosphere upbeat and friendly, the music calibrated to everyone’s taste, and the lighting, adjustable with a dimmer switch, fitting the mood of the moment. Not every party needs bright lights, after all.

The concept behind IRIS is that everyone is in it to have fun, especially owners Jesse and Sarah Dobbs, who have opened six stores so far and plan new locations based not on spreadsheets, but on falling in love with new cities. The core philosophy of the business is that sales associates become characters in their customers’ stories about their experience.

Lots of window shoppers walk into IRIS thinking it’s a traditional jewelry store. But this kind of jewelry requires more of a commitment than just tossing on a necklace or slipping a ring on a finger. When they learn most of the inventory is designed for piercings, they just might leave with a little something more than they had bargained for — not just a new piece of jewelry, but a new piercing as well.

“People will come in and say, ‘What’s that for?’ and I’ll say, ‘What do you want it to be for?’” Lombardi says. “They might say, ‘I’ve always thought about doing this.’ It’s fun to be part of that dynamic and to be able to blend two worlds for people.”

And there’s something for almost everyone.

Although the target demographic is 16 to 35, “it’s a misconception that piercing is relegated to teenagers or college age,” Lombardi says. “We have seen everyone from a 3-year-old getting her ears pierced to a 70-year-old man.”

IRIS blends piercing expertise with high-quality designer jewelry. The posts themselves are made with surgical-grade titanium.

The idea for IRIS started when Jesse Dobbs tried body piercing as a fun way to make extra money. In 2005, he opened the first IRIS in his hometown of Salt Lake City. He filled a void in the body-piercing industry by offering a more welcoming experience than what was typically the norm at piercing establishments. Gradually, he opened locations in Denver and Boulder, CO; then three more within a year in Brooklyn, Portland and Chicago. Each step along the way, the driving question for IRIS is always, “How do we keep having fun?”

Dobbs found that as body-piercing fans grew up, they wanted a better selection of well-made jewelry than had been available before. “For too long, if a person had a great jewelry collection and then would get a piercing, they were often relegated to a minimal selection of low-quality, and frankly, ugly jewelry,” Dobbs says. But jewelry manufacturers in the piercing world have upped their game and IRIS also works with designers they meet at jewelry shows to design special collections of jewelry to meet their needs. Jewelry is available in 14K gold with diamonds and other precious stones, as well as in silver, platinum and titanium. 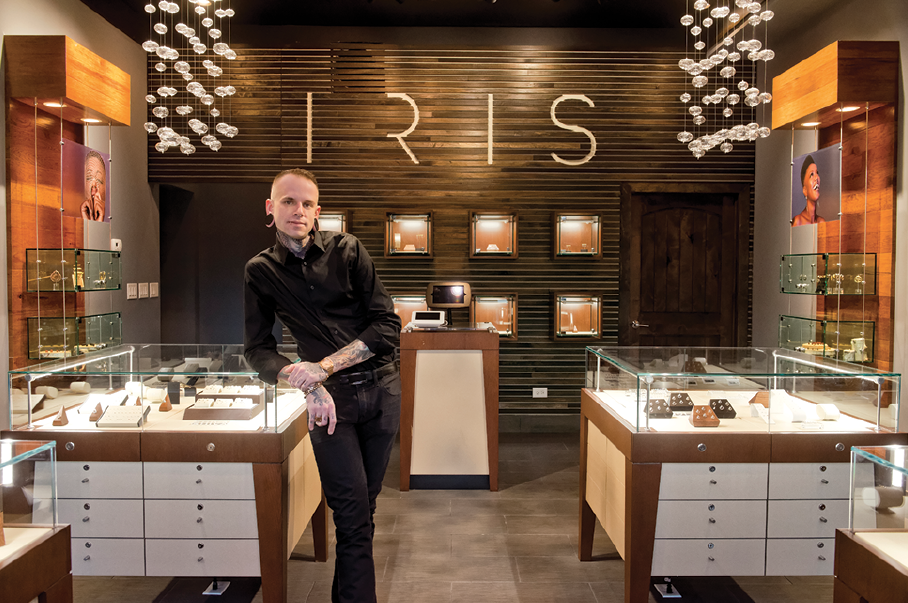 “For the first time, a client is able to build an entire identity with their jewelry for body piercing, as well as creating cohesiveness with more traditional jewelry selections like bracelets, necklaces and rings,” Dobbs says.

“Price is never the starting point in the sales conversation,” Lombardi says. “We have the luxury of working with so many designers that we have a wide range of price points. We don’t want anyone to feel they can’t afford to be in the studio.”

The Chicago store, with its 360-degree display cases and a point-of-sale island, was modeled after concepts found in stores like Apple that open up the whole showroom to customer exploration.

Store designer Scott Truitt says the challenge with a piercing boutique is to please both the die-hard piercers who already have a large quantity of both piercings and tattoos and the college freshman/ young woman who just wants to have her belly button pierced.

“There used to be a mentality in the piercing world about how many holes do you have and how big are they?” Truitt explains. “But we’re starting to see a shift from quantity to quality. It’s more about, ‘What do you have in your piercing?’ So we shifted the environment to become more refined and sophisticated.”

The color palette in the Chicago store is more monochromatic and reserved than previous iterations of IRIS, which were bolder. “When I first started working with IRIS, they had an almost tribal kind of feel to their store, which was very respectful of the history and origins of body piercing,” Truitt says. “But it was coming off as possibly intimidating. And so we shifted from that to a feeling that was more high-end, sophisticated and friendly. We still have woods and earthy tones to it, and we still use a very rich orange that you might see in a Tibetan monk’s robe.”

The jewelry is lighted with in-case LEDs fitted to the custom-made freestanding Artco cases. The cases are positioned around the room to ensure that customers are comfortable and Lombardi isn’t stuck behind a desk or a counter, creating unnecessary barriers. “It feels more collaborative,” Truitt says. “We got rid of the point-of-sale counter and created a podium-type experience where customers and employees can walk around it.”

The low case height also ensures good sight lines from the front to the back of the store, where floating glass cube displays draw the eye.

IKEA floor mirrors flanking the sales floor make the space look larger while also providing customers the opportunity to see how something might look on their ear, their nose or elsewhere. Trays of jewelry slide out of the cases for viewing, without a lot of hovering from sales staff.

When they were thinking of expanding to Chicago, drawn in part by a desire for Lombardi to return to his hometown, they had no idea which neighborhood they would choose. Says Jesse Dobbs: “We were sitting in the Air BNB we had rented and we just did a Google search for all of the hipster neighborhoods in Chicago and this neighborhood came up in the search.”

They drove out to Lincoln Square and walked around. “There were boutiques and restaurants that go on for a mile or more,” Lombardi says. “This building was being worked on; it was all boarded up. But we loved this street so much that we jotted down everything that was available.” It turned out to be the place they chose.

Traditional advertising isn’t something they’ve really considered. Word of mouth is powerful among their customers, even if it’s a couple of middle-school girls discussing where to get their ears pierced. “Every person who comes in here is going to leave and tell a story,” Lombardi says.

They have around 18,000 Instagram followers all over the country, who are eager to spread the news about a new location.

What’s next? “We always want to create and innovate, do something different,” Dobbs says.

1. Pre-opening marketing. The team created edgy posters in the style and size of movie posters and plastered them on the front of the building while it was covered with brown paper and undergoing construction. It created interest in the neighborhood prior to the store’s opening.

2. Cultivating a young audience. Core demographics are in a desirable age range of 16 to 35, but plenty of 9 year-olds stop by to have their ears pierced, too. Lombardi establishes a relationship with the kids’ parents (who will know where to shop for future gifts) while picking up a loyal customer at a very young age.

3. It has credentials. IRIS is the first company to have two piercers nominated for full-time board positions with the Association of Professional Piercers in the same year.

4. City love. “What brings us into a new city is a love for the city,” Jesse Dobbs says. “It’s an extension of the passion we have for what we do.”

5. Creative logo. It’s clean, sophisticated and simple with a sans serif font. But the modification to the letter R shows that they’re still being creative and different. “And ultimately, that’s what their brand is about,” says store designer Truitt. “It doesn’t have to be in your face to be different and to be noticeable.”

Malak Atut: Unique niche segment of the jewelry industry. Feels luxurious and accessible, with a bit of an edge. Perfect for their market.
Ben Smithee:Very unique concept and cool execution! Great use of space and clean look and feel.
Michelle Bailey: IRIS Piercing Studio and Jewelry Gallery is absolutely stunning, offering a comforting spa-like experience that showcases the jewelry that is offered in a unique setting.
Dan Kisch: The core philosophy of becoming characters in someone else’s story is terrific. The idea carries over into many aspects of IRIS’ business. For instance, having 360-degree showcases that allow the customer free access and make sales associates partners in the exploration is very strong. The images in the advertising are stunning and make a powerful impact on the viewer.
Nick Boulle:This business is cool in the most modern sense of the word. The design is elegant and high-end with beautifully clean lines. Whether you prefer traditional jewelry or are drawn more to this unique taste, the aesthetics of the store are sure to draw you in.

27 New Engagement And Wedding Rings Making People Say “I Do”

Tease Out the Secret Skills of Gen Z Hires, Teach Sales Associates About Brand Incentives, And More Tips For June