WHEN JOHN AHEE, vice president of Edmund T. Ahee Jewelers, surveys the media landscape these days, he can’t help but note how rapidly things have changed since he started placing ads for his family jewelry company when he was just a teenager.

Now, at age 50, Ahee navigates that landscape by outsourcing ad placement and social media campaigns to experts, since it’s become far more complicated than choosing between a handful of radio stations and network TV channels.

“So much has been diluted that it’s hard to pinpoint,” he says. “Every time we think we have it just right, it changes a little bit. If you haven’t changed your business promotion in the last 15 years — and changed it regularly in that period of time — you’ve got to be really struggling.”

The chosen formula is a mix of social, print, billboards, radio and a beautiful catalog produced in-house.

Ahee’s positioning statement is “Celebrating life’s special moments for three generations,” which fits with the brand message he’d like to convey — a graceful blend of quality, continuity, philanthropy and hospitality.

As for quality, more than half of the jewelry sold at Ahee is made in house, with carefully selected diamonds and gemstones.

As for generational appeal, Ahee’s 85-year-old mother, Bettejean still works in the business as do some of his nephews. Of 30 employees in the business, 14 are family members.

The fact that all seven children of founders Edmund and Bettejean Ahee, as well as many of their grandchildren, chose to work in the family business helps the store appeal to several generations of clients and reinforces the business’s commitment to the community.

As for hospitality, greeters open the door for customers, and a pianist plays a baby grand, underlining the elegant ambience in the 6,850 square foot store.

And, in the area of philanthropy, the family has a long-standing tradition of giving back to the community, raising $6 million for a local soup kitchen, alone, because, according to the store, “everyone deserves a chance to celebrate life’s special moments.”

Being in an affluent area has meant that business has been fairly level, without frenzied increases or precipitous declines in sales.

Shoppers are a mix of conservative, very affluent, men and women, but the mix skews slightly to men.

The brand message might well be one of transformation and optimism as well.

Founder Edmund T. Ahee, John’s father, lost his own father when he was just 12. Forced to drop out of school, he went on to open his first jewelry store in the lobby of his uncle’s bowling alley in 1947, selling fine jewelry, clocks, watches, small appliances, vacuums and giftware. Edmund died in 1999 and customers still tell the Ahee family how they bought their wedding rings from Edmund in the bowling alley.

The flourishing business moved from Detroit to Grosse Pointe Woods in 1968 and into a building that began its life as a De Soto dealership. It was later named the town’s first landmark.

While the business has always had a measured approach to publicity, its tradition for quality still gets noticed, most recently by a popular Discovery Channel TV show called “How It’s Made,” which will focus on how a diamond ring is made at Ahee, from design to execution. 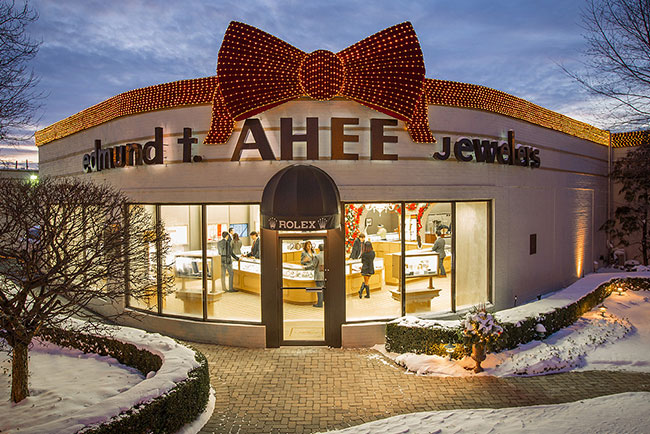 “We always wanted to wrap the exterior of our store with a bow for the holidays, but we wanted to make sure that it would be perfect,” John Ahee says. “We found a very creative landscape team and worked on designs and plans for months. The result is a burgundy velvet ribbon that wrapped around our entire 6,500 foot building with an oversize bow above the entrance. The bow was so custom that the team had to install it from the top of the roof in 3 foot sections … and then hand sew over 100,000 LED lights. The reaction from the community was overwhelming. People came in or called our store every day expressing how much they loved the bow and how much it added such a holiday spirit to our community. There were unexpected traffic jams in front of our building frequently as drivers slowed down or stopped to see the spectacular bow.”

The Ahees, admittedly nuts about customer service, were delighted to learn the company would be the first retailer in the world to receive the Five Star Five Diamond award from the American Academy of Hospitality Sciences. After they contacted the local newspaper to share the good news, it went viral. “We were inundated with emails, calls and letters of congratulations from all over the world,” Ahee says.

One of the brand messages Ahee conveys is hospitality and quality. A pianist welcomes shoppers by playing a baby grand piano near the store’s entrance.

Thirty-two years ago, Edmund and Bettejean Ahee started the “Capuchin Souper Summer Celebration” to raise funds to provide meals to Detroit’s less fortunate. Now the event annually attracts several thousand clients to Comerica Park. Edmund always felt that it was more important to give than to receive. So his children (all seven are in the family business) continue his tradition of philanthropy, raising $6 million for the Capuchin Soup Kitchen, founded during the Great Depression. “A lot of my father’s friends stood in that line,” John says. “When I was 18 he told me, ‘Thank God you may never have to know what it’s like to not know where your next meal is going to come from.” 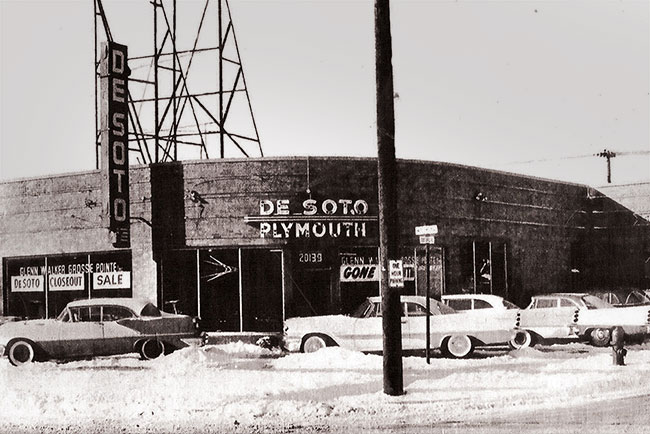 The store itself was once a DeSoto dealership. 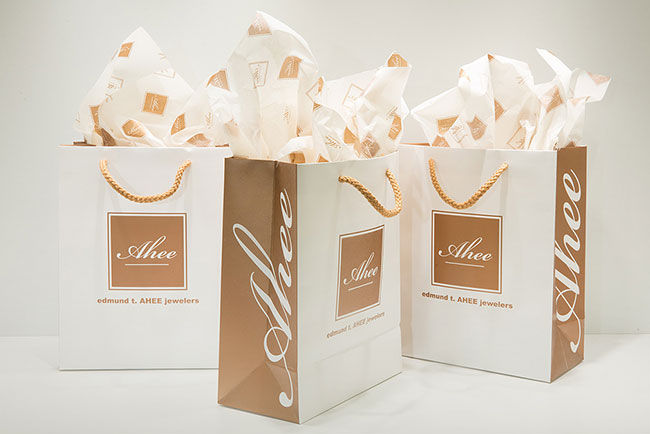 Packaging is elegant, understated and distinctive, reflecting the brand.

Target customers are affluent and conservative. The brand message is one of quality and hospitality.

Ahee outsources digital advertising and social media, but makes sure the company stays up to date.

Related Topics: brandingjewelry stores in MichiganMarketing
click to Comment(Comment)
Up Next