JEWELRY DESIGNER Belle Brooke Barer has always had a hands-on relationship with her art.

Now, with the opening of her studio and retail gallery on Santa Fe’s Canyon Road, Barer’s bench work is visible to shoppers, leaving no doubt about how and where it’s made.

Serendipity and the perfect space led Barer to open her first retail location in Santa Fe late last year. And although Santa Fe is often associated with turquoise jewelry made by Native Americans, “not everybody in Santa Fe is looking for traditional Southwestern jewelry,” she says. Barer’s distinctive designs are clean, modern and geometric.

Barer had been living and working in Taos, but when her daughter’s school closed, she decided to move to Santa Fe. When she made an appointment to check out an adobe-style building on Canyon Road, she quickly realized that not only was it perfect for an artist’s studio, but there was an adjacent space that could be a small retail gallery. “This is the only spot I looked at,” she says. “I didn’t have any hesitation about it.”

What’s not to love, with its generous natural light, beamed ceiling and wood-burning fireplace? The grand opening was Nov. 5.

Since Barer opened during the tourist off-season, the transition to retail has been gradual, giving her time to adjust from her previous work environment in a more isolated converted-garage studio in Taos. The biggest change so far has been moving from behind the trade show style case to side-by-side selling. She sells her jewelry wholesale to 10 retailers currently as well.

Canyon Road is home to a miles-long stretch of more than 100 galleries, many of them showing contemporary art. She has good reason to be optimistic about tourist traffic come spring. One of her neighbors says a slow day at the height of the season – June through October – could mean 50 visitors. Her gallery shares a parking lot (a rare amenity on Canyon Road) with the popular Tea House cafe.

She’s looking forward to meeting shoppers herself and so far, they have shown a lot of interest in the space, the jewelry and the workshop.

Barer didn’t always expect to have a career in jewelry. But while studying photography in college, Barer made and sold jewelry at a farmer’s market.

And when the world switched almost overnight to digital photography, she also switched gears, quitting her photography job to get professional training in jewelry, and working as a bench jeweler and goldsmith before launching her own business, Belle Brooke Designs in Los Angeles in 2006. In 2007 she won a business-development grant and in 2008 she was named best new designer of the year at JANY. She went on to win a Saul Bell design award.

“I don’t enjoy working with computers,” she explains. “I liked working with my hands and the material. I don’t do any of the CAD and that stuff. There’s a place for it in jewelry, but it isn’t like with digital photography, where once everything switched, film is just about gone. Now, just because CAD exists, doesn’t mean we have to do it.”

She’s drawn to the art of goldsmithing because the techniques used today aren’t much different from how it has been done for hundreds of years. “I strongly believe that my generation needs to leave something more tangible behind than just a digital footprint.” Each piece at Belle Brooke Designs is made using traditional tools and techniques, with human hands. 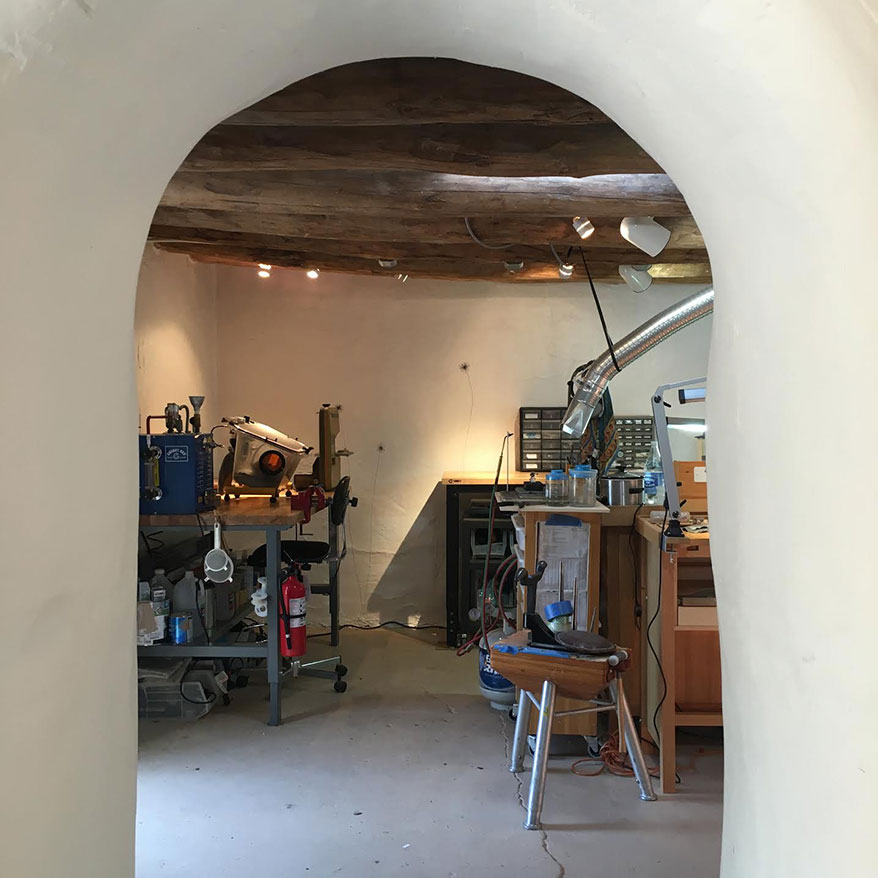 Classical black and white photography had an influence on her jewelry design from the beginning, specifically its characteristics of contrast, form and strong lines with a three-dimensional element. She’s also been inspired by early 20th-century industrial objects and even rusted, dilapidated factories. And by textbook depictions of microorganisms.

“A lot of things we build and make are modeled on nature,” she says.

Her geometric designs have evolved over the years to become what she describes as less chunky and more refined. She’s now working on a series of rings, featuring open space in their structure for an eye-catching sculptural look.

She and an assistant/goldsmith, Amanda Augustine, make jewelry by hand in the workshop, separated only by an open doorway in the light-splashed adobe space that was at one time in its history a stable and at another time the gallery of Ryan Roberts, an award-winning New Mexican jeweler who happens to be a friend of hers.

Although she’s moving into retail, she’ll be drawing the line at custom work and any kind of repairs, to minimize stress.

“This is not the kind of store where you can bring in your repairs, or have somebody remake your granny’s brooch into something new,” she says. “I don’t want to feel stressed out by custom projects or scary repair work.”

Her studio came with plenty of New Mexican character so didn’t need to add much beyond comfortable seating and modern, rustic showcases made for her by Couty Designs in Albuquerque of reclaimed wood and steel.

Her entire business and gallery has an eco ethos.

She uses 100 percent recycled metals and thoughtfully sourced gemstones and diamonds in her jewelry. The work of other artists she shows in the gallery is also very green.

The gallery features photographs by the artist’s mother, Cara Barer, who recycles books into sculptures and creates digital images of them to pay homage to the printed word. Also featured is work by Wyoming artist, Cristin Zimmer, who uses found windows and latex paint to create contemporary images with a Western theme. Visitors to the gallery will also find classical and modern sculpture in marble and recycled aluminum by New Mexico artist Britt Brown, who creates work using the human form.

“It’s an inspiring space,” Barer says. “Of all the places I’ve worked – and there have been many because I’ve moved around a lot – this is my favorite for sure. And now that I have these gigantic, heavy showcases in here, I’m not going anywhere. I’m here to stay.”

Blooms and Bouquets Adorn Jewelry as Spring Makes Its Approach

Memories of Cindy Edelstein, My Friend and Contemporary Jewelry’s Champion