Our mass data dig finds what’s separating the best from the rest.

MUCH OF THIS YEAR’S Big Survey reflects a simple question: Are you thriving or struggling in the current economy? Over the last few years, we’ve noticed in our contacts with readers a pattern that is being seen elsewhere in society: Two Americas, one doing well, the other doing it tough. For some jewelers, the economy is booming; there is lively demand from both a new generation of jewelry buyers and recently affluent customers for what they stock and what they make. Meanwhile, new online technology is allowing them to expand their reach. For another group, everything is the opposite. The local economy is stagnant, consumers are aging and the young don’t seem interested in jewelry. Technological change is increasing competition, healthcare costs and rent are squeezing profitability, and what once worked, no longer seems to. Our goal with this year’s survey was to first identify the Thrivers (those who said they were enjoying their best year ever) and the Strugglers (those who said business had never been so bad) and compare both their experiences and also how they operate. The results were fascinating, sometimes predictable but ultimately very instructive. Please enjoy.

1. A land of contrasting fortunes 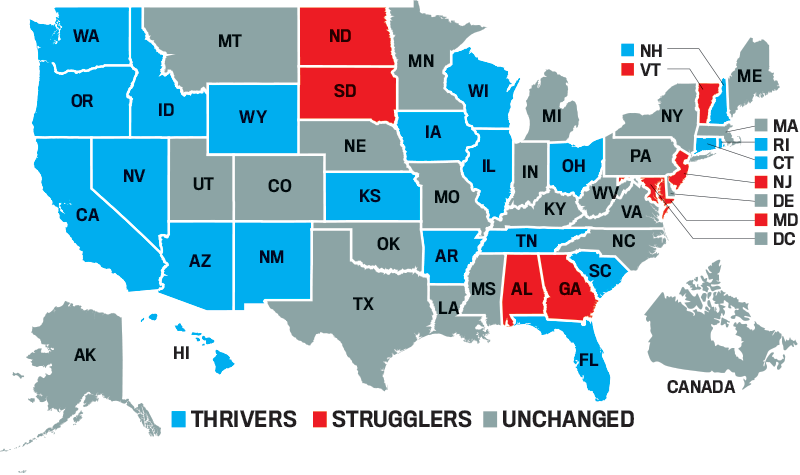 COMMENT: A total of 728 jewelers answered this year’s Big Survey with contributions from every state except Delaware, and D.C. To map this divided state of affairs, we designated states as Thriving, Struggling or Unchanged based on how they responded to our key question. In blue California, for example, 26 jewelers said they’d recently enjoyed their best year ever, while 5 said it had been their worst and 9 said not much had changed. Meanwhile, in red New Jersey, 6 jewelers said they were going through their worst-ever period, 4 said it was the best and 4 said it was little changed. In the great white of Canada, things were decidedly gray with 8 of 17 jewelers saying they were basically muddling along. The most thriving state in the land was Illinois, where 19 jewelers said times were great compared to just one who was struggling.

2. Looking at the last two years, would you rate either of them as the “best” or “worst” ever in terms of your store’s financial performance?

NOTE: Given that a store that had only been in business a couple of years would likely report their most recent year as their best, we excluded from our Best/Worst comparisons jewelers that joined the trade after 2015. There were only 10 such stores.

This year’s Big Survey was conducted between July and August via an online service, SurveyMonkey. With 728 readers responding, it represents one of the biggest-ever analyses of the lives and business habits of American jewelers. Thanks to all who took the time to fill in the survey. If you would like to participate in more INSTORE surveys, sign up for the Brain Squad at instoremag.com/brain-squad.

When Advertising For The Holidays, Pick One Medium And Do It Well