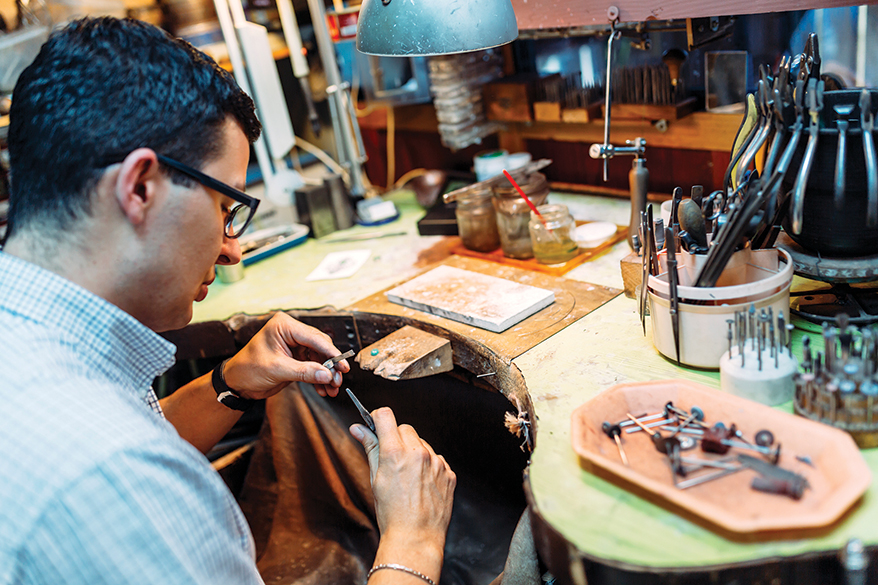 It’s hard to come by a good bench jeweler these days. Any tips?

There aren’t really many shortcuts, says shop guru David Geller. You can either find one … or grow your own. A headhunter will get you already trained people, although they don’t normally do bench tests. Two such recruiters are Vic Davis ([email protected]) and Rick Borchert (919-604-4084). You could also try the job search sites such as Monster.com, Indeed.com, Craigslist.com and ZipRecruiter.com, although Geller says he hasn’t had “anyone tell me about great success with these four — they get a lot of ‘I always wanted to be a jeweler.’” Another approach is to recruit directly from jewelry schools. Geller says his No. 1 choice is the New Approach School for Jewelers in Arrington, TN (NewApproachSchool.com). “They have two programs a year and can take a newbie and make them a darn good jeweler in 13 weeks. They will be great at setting stones. Some might be slow, but that comes with time.” Probably half will have jobs already, but there will always be some willing to relocate. But as Geller says: “You better offer good pay, benefits and of course be in a city that they will love. I’m told their students START at $18 to $20 an hour. Think about that.”

Finally, there is the grow-your-own approach. To begin, hire a younger person to do simpler work like polishing. If the polisher shows any aptitude for the job as well as any interest in learning more about the profession, you can start working with them. Beyond in-house training, many jewelry schools offer one-week courses, which Geller suggests you pay for. Next level up is a long-term six-month course that will deliver you an accomplished tradesman. Geller recommends paying half the fees with an offer to reimburse your apprentice for his share if he completes two full years of work for you. “You’ll recoup your investment in a short amount of time, especially if you charge correctly. You’ll also have someone who is probably very appreciative and won’t have any bad habits you have to retrain.”

Are employers allowed to require employees to sign agreements that they can perform certain physical tasks associated with the job such as going up and down steps/ladders, lift certain amounts, stand for a certain number of hours? If an employee becomes unable to perform these tasks, can the employee be let go?

You’re entering a tricky legal area here because the law – specifically the Americans with Disabilities Act (ADA) – puts a heavy burden on employers to accommodate workers’ physical limitations. And this starts in the hiring stage. As you’re no doubt aware, you can’t make broad inquiries during a job interview about any disabilities a person may have, although you may ask if one appears to be job-related. But even then, “the fact that an employee or applicant states that he or she is unable to perform a task associated with the job at issue, still does not mean that an employer can refuse to hire or discharge an employee,” says Dan Clark, a labor and employment partner at national law firm

Vorys, Sater, Seymour and Pease LLP, noting that you have to be able to show the task that the employee cannot perform is an “essential function” of the job.

And again, even if the task is regarded as essential, the employer must also show they have made reasonable efforts to help the worker such as, for example, rearranging schedules, retraining, or modifying equipment.

As for asking the employee to sign a contract acknowledging his or her ability to perform certain job functions, “this document would not allow the employer to avoid the requirements of the ADA if circumstances were to change,” says Clark.

Given many states also have their own laws regarding disabled employees, you would be very wise to consult a lawyer before proceeding with any plans in this area.

A Smarter Way to Display