KOEHN & KOEHN IS the rock concert of jewelry stores.

Music can be heard out in the parking lot, ripped jeans and leather jackets are appropriate attire, you can buy a souvenir T-shirt that says “Rock Your World,” and there’s even a taco truck on site. They have a collection of pre-set diamond engagement rings that a client dubbed “ready to rock.”

“The way we dress, the type of music we play, we try to make it as comfortable as possible for guys coming in,” says Jenn Koehn, who owns the venue with her husband, Andy.

Andy says their audience can tell from social media that they are not a typical jeweler. “Our vibe doesn’t match everybody’s, and everybody’s doesn’t match ours. One woman said she came here because there was so much unexpected humor on the website.” Another couple said they knew from online search that they’d found their “place.”

Koehn & Koehn is known for unconventional signage, but “Surely not everybody was Kung Fun fighting” is the most likely to elicit a chuckle.

The in-store vibe includes a wide-ranging soundtrack that is definitely not an afterthought, but the result of hard-fought deliberations.

“We always battle over it,” Jenn says. “He likes the Rolling Stones and the Beatles, and he’s very picky; he doesn’t like to expand his range. And I like old country, Willie Nelson, and some new country, and we throw in a little bit of Beastie

Boys and Foo Fighters.” They asked customers for input to curate a Spotify musical list. Andy sits on the board for a group called Home Grown Music, which supports local musicians and songwriters.

Koehn & Koehn is one of the only businesses in town that has a food truck permit. Just recently they’ve updated the interior, adding a bar and lounge area with a brick wall and a yellow couch.

“People are at ease coming in, they’ll grab a taco and come inside,” Andy says. The conversation begins with banter and breaking the ice. “We don’t go right into the sales process, and we don’t talk about politics. We might talk about the Packers.” The sales staff is adept at keeping things light and throwing in a joke once in a while.

Jenn is responsible for back of house operations and Andy is up front. “I’m basically a sales guy and trainer of staff, and sometimes, I’m the greeter,” Andy says. “I spend a lot of time on the sales floor. I like to warm up the crowd and then hand it off to one of the salespeople and then just be there. We call ourselves a band, I’m kind of a lead singer and Jenn is the band manager, the idea person. But sometimes Jenn has to be on stage, too, and be the doo-wop singer.

“It’s eclectic, but somehow everything we do is tied together into a theme that says, ‘We’re not the same old, same old.’ People can see there is something different about us from the moment they see the contrasting angles of the exterior and then find a cohesive, clean, open and energetic feel when they walk in. It’s unexpected from the first look, and that carries through with our way of interacting with our clients.”

Andy Koehn considers himself to be the lead singer of the operation while he describes his wife, Jenn, as band manager.

Unexpected also is the offbeat store signage, which reads, “People will stare. Make it worth their while” and “Surely not everybody was Kung Fu Fighting.”

“The Kung Fu fighting one gets people laughing,” Jenn says. “They love it, they just love it,” says Andy.

Sixty to 70 percent of their visitors are looking for wedding and engagement jewelry, and most of the rest are in the market for diamond fashion. There is also a small but growing contingent of female self-purchasers who want fashion jewelry. Generally, self-purchasers buy jewelry in the $50 to $100 range made by local designers, but sometimes the purchases include pricier pieces by John Hardy or Anna Beck.

Andy and Jenn have been working together for more than 10 years. The secret to their working relationship is staying in their own lanes. “I know his lane is sales and training,” Jenn says. “That’s his forte, so I stay out of his lane, and he has to stay out of my lane.”

The Koehns refer to their staff as “free range,” which means they are free to let their individual styles shine and be their authentic selves. “We emulate garage bands in this respect,” says Andy. “Great equipment, cohesive band mates who know their role, and execute when it’s show time. We have a loose structure that leaves room for improv on the part of our associates, but there is enough structure to deliver on time.”

Andy says hiring independent people and trusting their judgment benefits the client, the business and the owners. “If they get into a place they don’t know the answer, the rest of us are around to collaborate with the client,” he says. “We definitely trust our team, and they trust us not to go nuts if they make a mistake. People are basically smart and want to do a good job.”

Although the store is currently short staffed, the team collaborates on schedules that allow for family functions or child-care obligations. “We do understand that family does have to come first,” Jenn says.

COVID concerns led to shorter hours that were then expanded slightly in December. Now they’re closed Sundays and Mondays, open 10:30 to 5:30 weekdays and 10 a.m. to 3 p.m. on Saturdays. “We recently added four hours to the week.

But again, with this small group of people, that’s a hard thing. One of the things COVID taught us is that the days of just having showroom hours is a bit taxing and probably not the payoff that you might expect. Sitting around and waiting is a drag.”

So, they’re encouraging appointments and having more conversations through social media and email to narrow down what customers are looking for, which makes in-store appointments more efficient. “When they come to the appointment, it’s almost like a formality; they want to see you and meet you before they pull the trigger,” Andy says. “I like that. We’re more effective when we’re here, and more present with our clients as a result. The level of service has gone up, even though our hours have gone down.”

Andy’s grandfather, Walter Koehn, was in the seventh grade when he quit school and found a job as a watchmaker’s apprentice at a small jewelry store in Milwaukee in the 1930s because his family needed the money. Walter stayed in the business, opening his first store in West Bend, WI, where his son Jack joined as a partner when he returned from the Korean War. That’s when the business became Koehn & Koehn.

“My grandfather and father brought us to a certain point, but I wanted to have a cool little oasis of a store,” Andy says. “The Koehn & Koehn of today is open, fresh, host to several world-renowned brands, but most importantly, a family business with soul. My wife Jenn is the other name on the sign now, and it’s a pretty killer collaboration.”

1. THE MARKETING MESSAGE. “We do it on our own,” Andy says. “Why is that cool? Because our voice is ours, and we own it. We tried marketing firms. Not for us. They don’t work here, so they can’t know what it’s really like. It’s why we hired a full-time social media person. She works right alongside us and knows the drill. That comes through in our marketing messages.”

2. THE LAB-GROWN DIAMOND ISSUE. “It’s a part of every discussion that we have now,” Andy says. “My take is it’s really about how does it feel or resonate with the clients. I tell people to go with their gut because whether it’s natural or lab grown, it is a symbol, and it is between the two people and whatever they want to communicate out to the world. I have my personal belief of what I would do, but it is so up to you. Don’t let my bias influence you.”

3. DIAMONDS TO GO. “Ready to rock” engagement rings are pre-set and available in five different sizes and price points.

4. BUY LIKE A GUY. Andy Koehn started a blog of informal, unconventional wisdom that has evolved into a series of YouTube videos. One recent episode features guys tasting bourbon and talking about what they want to know about rings: How do you budget? How do you decide? When do you buy it? “I wanted to know what was on their minds when they walked through my door,” Andy says. “I personally really like when someone comes in, a newbie, typically a guy, and he will say, ‘I love the Buy Like a Guy stuff.’”

5. ON THE CALENDAR. Events range from an annual ladies’ night to wedding band expos and fundraisers for non-profits. “We put on a good show,” Andy says of ladies’ night. “Not extravagant, but just a nice bonding thing for people.” Most events are by personal invitation. “Pure digital, pure outreach, pure appointment,” Andy says of the wedding band expos, which include rare price reductions. 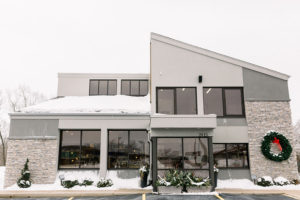 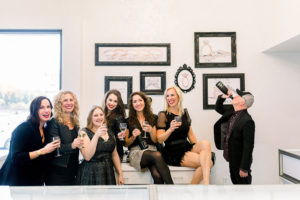 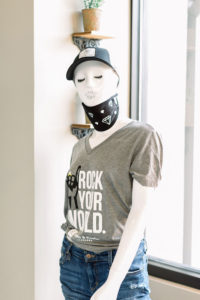 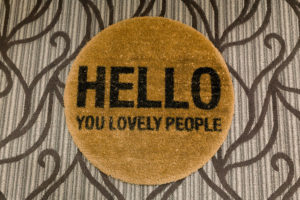 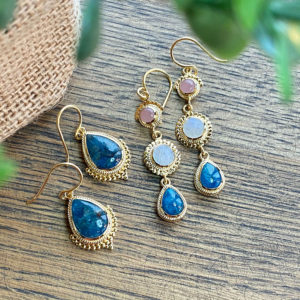 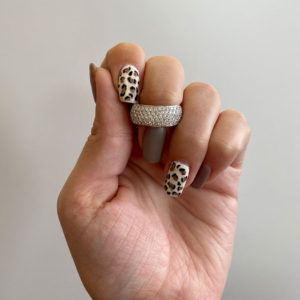 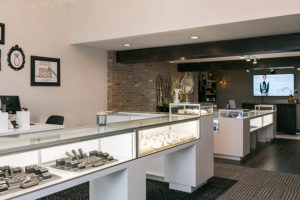 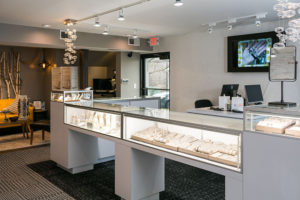 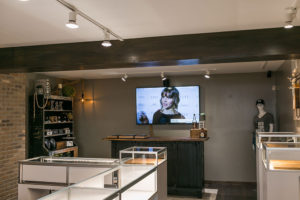 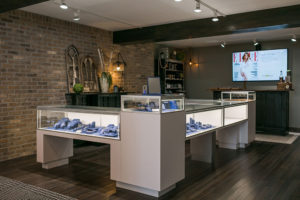 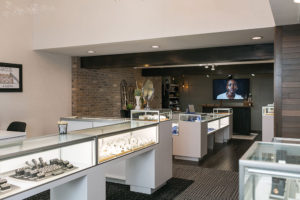 Try This: Loosen up and make mistakes.

“Try things that don’t work perfectly and be ready for the unexpected that comes from a little ‘seat of the pants’ management,” Andy says. “Structure is old by the time it’s implemented, so cut down your playbook to a few key points. Things like, ‘Don’t be an asshole,’ ‘Make life easy for your clients,’ ‘Keep your promises,’ and ‘Don’t be afraid to make the obvious jokes.’ (And let your staff know that the lyrics are, ‘wrapped up like a deuce,’ not ‘douche’).”

Related Topics: Featuredjewelry stores in Wisconsin
click to Comment(Comment)
Up Next