SKIES MAY BE DARK, but a walk by Yaf Sparkle Boutique on New York’s Lower East Side promises an instantly brighter day. Passersby smile at the enticing sparkles dusted onto the sidewalk around its front door each morning and the glow of gold in its grid-designed windows.

A German couple who came into the store had no trouble communicating because Torsten is from Hamburg, Germany. They were so charmed by the spot and the people that one of them proposed to the other on the spot. “There were tears all around,” Torsten recalls. “Luckily, we had a bottle of Champagne in the fridge, too.”

Yaf Sparkle Boutique has its hand in social media from Twitter Instagram, Linkedin, Pinterest and Facebook to its own blog. It includes favorite pieces, inspirational sayings and news about life in the Lower East Side to bring its community to its buyers. It rates close to five stars on Yelp for its service and selection.

“There’s a skateboard shop next door, and we have a lot of skateboarders who roll their boards by us to pick up the sparkles on their wheels,” says founder Yaye Fatou Boye-Flaegel, laughing.

Yaf, as she’s known, and her husband, Torsten Flaegel, built a business from the ground up. She welded her experience in retail sales and jewelry design to his motivational skills and discipline as a basketball coach.

The couple admits they were flying blind. None of their parents had been in retail, and Yaf’s experience was largely behind the counter, although she sold her designs at gatherings on weekends to raise money for children’s needs in her native Senegal.

“Most important to me is to provide what my clients want. If I need to go to an outside designer I will,” she says.

Yaf doesn’t think in terms of insurmountable obstacles. She sold her designs at trunk shows and parties for years to fund outreach for her ASB foundation, which helps the children of lepers in Senegal.

But she knew when she became pregnant that she wanted a life in which she could set her own hours, still show her jewelry designs and work with her husband.

A friend told Yaf the Lower East Side was the emerging shopping district, that she should forget her original destination of Tribeca. But the couple had no money for site research and Yaf was still working at another jewelry business.

So Torsten became a sidewalk sleuth that summer, watching foot traffic in various locations and talking to local businesses. A veteran UPS driver told him what days were slow —Mondays — and other locals talked about shopper demographics.

That shoe leather survey paid off. The store they finally moved into is in a high-traffc area. The iconic Katz’s Delicatessen is around the block. It’s two blocks from the picturesque, muraled First Street Garden, and the nearby Tenement Museum draws hundreds of thousands annually to learn about the city’s immigrant heritage.

The Orchard Street store had a further advantage. On summer Sundays, the street is closed to motor tra c and becomes a pedestrian mall. Its Old World plaza-like ambience lures browsers and fosters outdoor social events.

Yaf’s location requirements included vintage architecture with character. The lean 15-by-50-square-foot space they secured had that: brick walls and a high ceiling that would be perfect for an exposed beam look.

But their old building still held the bones of its history. One shared wall was sheetrock; only the opposite wall could be exposed brick. Further, all of the previous businesses’ pipes snaked above the ceiling facade they planned to tear out, and its electricity was strung inside, along a wall.

“It had a couple of walls (inside). This was, before us, a hair salon. When we came in there was a counter, and there was a pipe in between that and the wall,” Yaf recalls, remembering her dismay.

“The electricity was on the left side. We had to bring all the electricity in through the basement,” adds Torsten. An inside door led to another business; the building had once held apartments, too.

“We took out a full truckload of garbage,” Yaf recalls.

There were some other disadvantages with its size. The boutique does some repair, but Yaf has to send her designs out to various craft experts for molding and setting.

Yaf and Torsten moved pipes, tore out the walls, covered the unused door and ripped out ceiling tiles to expose beams. Still-exposed pipes were painted copper to give it the panache of intentional décor.

“We were all hands on deck 24/7,” Yaf remembers of the remodeling, Some of those hands belonged to Torsten’s father, who came to New York to help build their cases. They were done in a little more than six weeks.

Within eight weeks, Yaf’s boutique was ready to sparkle. But she was still committed to her former job for another week, so Torsten moved into sales, stang the store.

“Having finished up the space and transformed it so much, the moment of actually opening the door and actually o ering merchandise, the pride and joy of it, was exciting,” he says.

To work with the long, narrow space, the pair angled some cabinets, giving customers a sense of exploration. Cases jut out in a gentle serpentine pattern, allowing the treasures within to unfold.

“As a jewelry store, the way I believe my stuff has to be shown is in movement. Everything has to be moving all the time,” Yaf says. It’s in tune with the young, active crowd moving into the Lower East Side, along with robust tourist traffc.

A creamy ivory color predominates, broken only by the brick wall. There’s creative display, but no fussy detail work.

“We wanted both genders to feel comfortable in here,” Yaf explains.

Her previous work was in a jewelry store that specialized in men’s jewelry, and she has a special feeling for it: She met Torsten, in fact, when he came to look for a bracelet.

The two love the sense of community around their location and feel strongly about contributing to it, working with other businesses through the Lower East Side Improvement District. “We are really involved in supporting each other,” Yaf says.

Yaf is happiest, however, about her weekend customers being able to visit her all week. “People were very excited to see the girl with the table and jewelry now actually have brick and mortar,” she says.

1. Who is your most significant mentor? to millennials?
My father. He’s just an amazing, well-rounded person and he was the first person to buy me How to Win Friends And Influence People in French, before I studied English in college.

2. What advice do you have for a new store owner?
Make sure it’s your passion. Make sure you love what you do.

3. How do you stay current?
Being on Twitter helps. Facebook helps. Having INSTORE Magazine, and going to trade shows. I don’t necessarily like listening to the news. I have a belief that if it’s really important somebody will tell you.

4. If I were a precious stone, I would be …
A diamond. I definitely feel like I am one in a million, too.

5. What is your dream trip?
I would go to Paris. There’s just something about that city that makes you feel so nice and wonderful.

1. THEY BRING ROMANCE TO THE COUNTER. Yaf and Torsten met when she was selling men’s jewelry at another store and he was a tourist looking for a bracelet. They’ve encouraged romance in their own store with
a Valentine’s Day party featuring chocolate-dipped strawberries — “But you can’t feed yourself. You have to feed someone else,” Yaf insists.

2. THE STREET SCENE. Yaf Sparkle Boutique is located in an area popular for moviemaking in the Big Apple — a famous scene of When Harry Met Sally was filmed in nearby Katz’s Deli. But Yaf admits everyone’s jaw dropped when Robert DeNiro walked in one day: “‘Just call me Bob,” he told us.

3. THE GLOBAL EFFORT. Yaf Sparkle, the original jewelry line, began as an outreach project. To this day, Yaf says, 10 percent of her jewelry’s net proceeds go to nonprofits, including the ASB Foundation she founded in 2007 to share with children in need in her native Senegal.

4. THEY LOVE ARTS. Yaf Sparkle Boutique will hold openings for artists’ new works
and authors’ book signings, hosting receptions in the store. Not only does it bring in new customers, Yaf says, the artists sometimes create scarves with their designs, enhancing the boutique’s jewelry, belts and bags inventory. “That gives us more to offer,” she says.

5. THEY HAVE SPARKLE TO SPARE

“Our tissue paper has golden specks in it, and if I’m sending a card, if it’s a woman, I’ll throw some sparkles into the envelope,” Yaf says. But their favorite sparkle is the reaction from passersby, who may be halfway down the block before they notice the sparkles on their shoes, and smile. 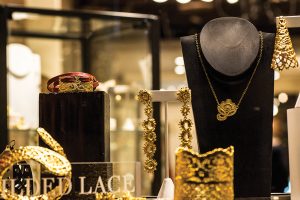 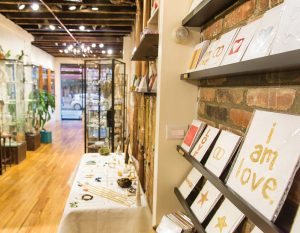 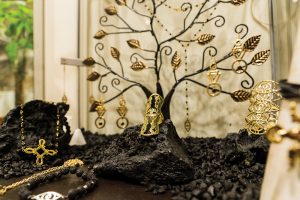 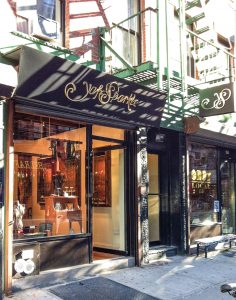 Related Topics: jewelry stores in New YorkOnline Extra
click to Comment(Comment)
Up Next

10 New Designers You Should Check Out For Fall/Holiday 2021