IN TODAY’S FAST-PACED digital world, a traditional billboard may seem like an old-fashioned way to advertise. The medium has been around since the early 1800s, after all. But consider these takeaways from the 2016 Nielsen Out-of-Home Advertising Study:

Nineteen percent of those who view out-of-home ads, in general, have visited a store or other business after seeing a message, according to the study.

Traditional billboards—meaning, non-digital—remain an effective way to engage existing and potential customers. With that in mind, we asked seven storeowners who use the medium successfully to share their experience as well as their best campaigns. 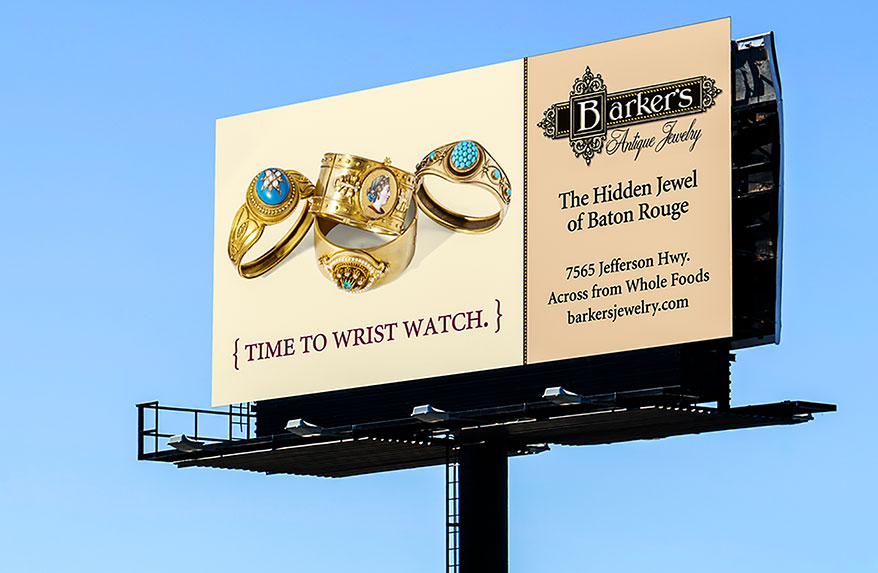 Barker’s billboard is the best of both worlds. The split-screen effect combines eye-catching bling and a cute play on words on one side and specific directions on how to track down that bling on the other side.

Diamonds Direct has put its billboard in motion. Wrapped along the side of a bus, the ad depicts a beach with Diamonds Direct’s jewelry in the sand and a local model seeming to propose to those who enter. The billboard is part of an ad campaign promoting the company’s proprietary diamond cut, called the Sunshine Cut.

When you want to announce to the world you’ve moved, billboards are a perfect medium to convey that message. D. Geller’s signage, whether providing directions or reinforcing its mission as an engagement destination, has a consistent brand look.

There are two main routes into the town of Kilmarnock on Virginia’s Northern Neck peninsula, and Burkes Fine Jewelers has a billboard along each.

“Billboards have proven to be a very effective form of advertising for us,” says Whitney Lang, event coordinator and sales specialist for the store. “We’ve found that general advertising of eye-catching jewelry paired with memorable taglines brings us the most business.”

Created in-house, the “Gone Fishing” campaign did exactly that, resulting in increased sales to both residents of and visitors to the coastal community.

Howard G. Jacobs uses regional humor to build awareness of his Boston-area store. The “Wicked Awesome Rings That Spahhrkle,” “The Real Players of Quincy” and “We Have the Rings, Just Give Us the Finger” billboards created buzz and brought in customers.

“The more risk, the more people talk about me,” Jacobs says. “Once they walk in the door, it’s as simple as showing them my products.”

Using the same image of Jacobs and his son Adam in all multiple billboards also allowed Toodie’s Fine Jewelry to tout its status as a family business.

Smyth Jewelers turned to ad agency TB&C for help reaching millennials. The resulting “New Rules of Engagement” campaign reflects how this generation goes about getting engaged, and it uses a variety of media, from social to old-school billboards. “No. 9 | Get Down on One Knee Because Two Is Begging” was the first rule to run on a billboard, with others from the list of 50 are scheduled to go up in coming months.

The “It’s Good to Have Alternatives” tagline has a double meaning, says Christopher Duquet, who serves as creative director for all of his store’s advertising campaigns. It not only spotlights the alternative design of the ring featured on the billboard, but it also sets his jewelry apart from that of the big-box chains, a common theme in all of his messaging. “We want to feature our most interesting designs and make it clear that we create our own jewelry,” he says.

Related Topics: advertisingBenchmarksbillboardsINSTORE June '17Marketing
click to Comment(Comment)
Up Next

See How 8 Top Jewelers Set Up Their Bridal Sales Areas

Gen Z Is Moving Into the Engagement-Ring Market