WHILE BEING NAMED ONE of America’s Coolest Stores feels really good to G. Thrapp Jewelers owner Gary Thrapp, it’s just another milestone on the journey for a guy who once worked as a breakfast cook in the mountains of California. “Life isn’t about chasing a destination, it’s about enjoying your time and learning about yourself as you go on,” says Thrapp. “I personally hesitate to use the word ‘success’ because the moment you feel you’ve reached ‘success’ is really when you’ve kind of reached the end. Every day brings a new challenge.”

The idea of “the journey” is echoed in the store’s tagline as well as its logo: a ship. The nautical theme continues throughout the store, which is decorated with all kinds of maritime-related items, including skis, a canoe, and even a mainsail mast, each one with its own provenance. “Northeast Indiana where I grew up is lake country,” says Thrapp. “I’ve always felt that if there was one thing I could surround myself with that would put a smile on my face every day, it would be the maritime/ lake theme.” Thrapp purchased a lake house upon his return to Indiana from California, and the garage was full of old lake toys. “We have some of those things around the store in addition to special pieces I’ve acquired over the years. It’s just fun, and people love it.”

This nautical theme was prevalent in the store’s design when it was named a Cool Store in 2008. (Stores must have moved, opened a new location or significantly remodeled to be eligible to re-enter the contest.) When the store was redesigned in 2012 by interior designer Nancy Whitacre, the nautical paraphernalia was a huge consideration. “It looked choppy before. Maybe people thought it was starting to look like Fred Sanford’s back yard,” jokes Thrapp. “Nancy knew just how to pull the colors together. The showroom looks larger now, and we have nautical accents in the lighting. And we have a full room dedicated to David Yurman.”

Yurman was one of the first designers the store picked up, back in the days when David Yurman himself was his own line’s salesperson. Today, the store carries more than 30 designer lines. “We have a strong diamond area and bridal area, and we’re probably Indiana’s foremost estate and period jewelry authority,” says Thrapp. “But the designer jewelry is the cutting edge. They’re not necessarily big names, but they’re really sharp, cool designers. We spend the majority of our time sourcing new, upcoming designers.”

The store also features its own designer, Ellen Bower, whom Thrapp calls “one of the nation’s best.” While CAD/CAM is a must-have for stores who offer custom, says Thrapp, you can’t make a “finesse” piece of jewelry without model-making and fabrication abilities. “We have so many clients who want that handmade, prototype, one-off kind of jewelry-making experience. We even do it for a couple of major wholesale manufacturers who can’t get that level of quality production anywhere. It seems odd that a designer of her quality would be here in Indianapolis, but she’s an amazing talent.”

Despite all the incredible features of the store and the awards it’s won over the years, what makes Gary Thrapp most proud is being recognized as one of Indiana’s best names in fine jewelry, and doing it in just 30 years. And, he’s proud of his people, eight of whom have worked in the business for 10 years or more. “It’s a cool thing to have built a life’s work in 30 years and continued to evolve while staying in the same place,” says Thrapp.

“People often say, ‘It’s cool that you found your passion in jewelry.’ But really, jewelry isn’t my passion. My passion is for the people here to discover their own strength and find the ability to do what they want to do. Jewelry is just the medium.” 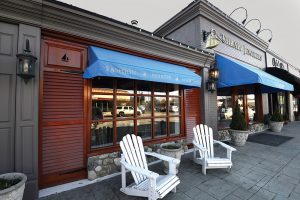 1. ESTATE AUTHORITY. Gary Thrapp is passionate about estate and period jewelry, and as a result, he says he’s cultivated Indiana’s premier collection of such jewelry. “I got my taste of period jewelry in California at my first job. They had amazing pieces, and you could tell immediately that there was a huge difference in how they were made from the way new pieces are made,” says Thrapp. He adds that expertise in period jewelry is not something that’s easily earned. “I’ve participated in many Christie’s and Sotheby’s auctions and spoken to a lot of people in the business over the years.”

2. BOAT shed PROVENANCE. The maritime-themed items displayed around the showroom weren’t picked up at Pottery Barn; each one has its own story. A 1927 Old Town, Maine Sponson-style canoe hangs above the back door. It was originally owned by Frederick C. Kroeger, an executive at General Motors who moved to Indianapolis to take charge of Allison Transmission during World War II. Thrapp’s collection also includes a wood mainsail mast hanging above the sales floor, which belonged to Eli Lilly of Lilly Pharmaceutical Co. There’s also an old lake surfboard from the 1940s once owned by Henry Eckrich of Eckrich sausages fame.

3. TWO WORKING FIREPLACES. G. Thrapp’s two fireplaces are open hearth, lodge-style fireplaces, one with custom-built bookcases on either side and Adirondack chairs, and the other with comfy recliners. “After we expanded, we had a huge wall that I guess most people would line with showcases, but I didn’t want the store to be completely filled with showcases. I wanted an area where people can sit and enjoy the process,” Thrapp says.

4. $150,000-PLUS ANNUAL DONATIONS. n 2013 alone, G. Thrapp donated $150,000 to local charities — and that is only counting in-kind donations such as gift certificates and product. “Charitable giving, especially for independent jewelers, is not only a good thing for community, it’s the right thing because it completes the circle. Our clients should expect us to respond when they ask us to be a part of their organizations because they support us,” Thrapp says.

5. “TEXTING” CAMPAIGN. The G. Thrapp team chose a high-traffic, millennial “melting pot” area of Indianapolis to run a billboard campaign that featured a new message every two weeks displayed on what looked like a large smartphone. “We decided to create a texting romance between two people,” says Thrapp. At one point, the male character blew it with the female character and had to win her back. “It went on for a year and a half. We had people coming into the store demanding to know what was going to happen next.” The campaign ended with a proposal from the male character and coincided with a successful bridal-themed party in the store.

G. Thrapp salespeople present each engagement purchaser with a bridal package. The box includes exclusive discount cards for wedding services, including great deals for purchasing things like cake, wedding dress, bridesmaids’ dresses, flowers, photographers, etc. The package also includes a customized G. Thrapp Jewelers’ ring tray for the engagement ring, a nail file, a “something blue” hair pin, and a G. Thrapp Jewelers pin. The salesperson invites the groom to bring the bride in after he proposes so she can pick up her bridal package and meet the G. Thrapp team. “We figure the bride would find it way more exciting than the groom,” says marketing director Lauren Bauer.

Natalie Bos:  What I like best about G. Thrapp is just how different their interior is from any other jewelry store. The nautical theme is really unique, and I think they’ve pulled it off beautifully. Each decorative item has a story, and for me, that’s really important because that attention to detail most certainly translates to the jewelry they sell and customer service. Lastly, I love the openness of the store and the cool watch bar.

David Brown:  I like a culture that is built on comfort, a warm welcome, quality, trust and service — not price. A strong staff culture makes it easy to have a strong client culture, and they appear to have achieved both.

Danny Clark:  The interior is eclectic with a purpose. The emphasis on customization over time has been ahead of the curve. Great job connecting socially with the customer.

Andrea Hill:  I appreciate that the team at G. Thrapp assesses how successful they are being by paying close attention to what customers say about them. This authenticates their claim they are customer-focused. The inside of the store is quirky and fun with all the boating paraphernalia. It feels welcoming and approachable.

Heather Hanst:  G. Thrapp Jeweler’s nautical interior draws you in immediately. What an inventive, original design! It sounds like the G. Thrapp family is composed of long-time, deeply educated employees who love their jobs. That speaks volumes. I also love the company’s dedication to philanthropy and focus on customer service — all very inspiring!

Related Topics: G. Thrapp Jewelersjewelry stores in Indiana
click to Comment(Comment)
Up Next