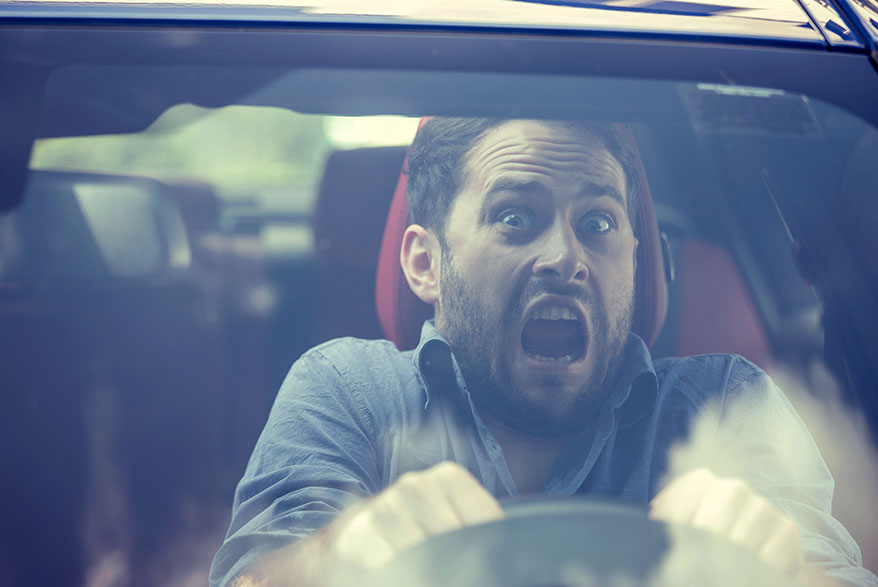 Our shop was very busy one afternoon, when all of a sudden my husband yells, “Oh s#[email protected], call 911!” and goes running out the door just as a car hops the curb and crashes into the glass door and surrounding concrete wall of the Safeway next door to us. My husband (who is a former policeman) assists the motorist as he rolls the car back off the curb and into a parking slot. He had meant to park the car, but accidentally hit the gas instead of the brake. As one of our staff is talking to the 911 operator, they ask, “Does the motorist have any visible injuries?” Hollie, our manager, was quick to let them know that the driver had only one leg, but that it didn’t happen because of the crash. (Turns out his amputation was a month old.) This man had “borrowed” his wife’s car while she was out of town and he kept saying, “She’s going to kill me!” So, the fire department comes, the paramedics come … the guy says he’s fine. He says he needs to go over to the grocery store to get what he came for: ice cream. Said he’d be back to talk to the police after he got that and away he goes with his crutches. Police come … they wait and wait … pretty soon, here he comes, driving one of those complimentary electric carts for shoppers, and as we’re all watching in disbelief, he drives right into the large decorative post in front of our shop. Backs up and then drives once again into the post as he was trying to get by it to talk to the cop. — Teri Vogan, Vogan Gold & Silver Works, Inc., Colorado Springs, CO