BACK IN FEBRUARY 2020 the beautiful and talented Zendaya became one of the four new Bulgari ambassadors. Since then she has been seen draped in some of the most lavish of the renowned house’s high jewels, imbuing them with a new effervescence that is creating a fresh clientele—a new generation of women who only could read about Elizabeth Taylor, Sophia Loren, Gina Lollobrigida and Anna Magnani’s association with the company that opened its first shop at the top of the Spanish Steps and then on the fashionable strip of Via Condotti in 1905 and where it has been a fixture ever since. Do these youthful clients even know who Anna Magnani is?

While there have been quite a number of ambassadors in between the stars of the mid-20th century and today, Zendaya wears the brand’s favorite classics as well as the Bulgari High Jewelry’s brand new designs with an unstudied chic.

When talking to Jean-Christophe Babi, CEO of Bulgari Group about why the 2020 Euphoria and 2021 Dune actress was chosen, he explains, “Contemporary and self-confident. Zendaya is therefore the Bulgari woman par excellence. Talent and beauty at the same time. She perfectly embodies the Bulgari creations through her strong personality and charisma. We are honored to have Zendaya as our brand ambassador and as part of the Bulgari family.”

From the summer through the fall Zendaya has shown up at different red carpet events, including The 2021 Oscars, in which she wore a favorite necklace (above) of the jewelry press and one of the best looks of the evening. She debuted a stunning yellow diamond necklace offering a special sneak peek at the brand’s 2021 high jewelry collection, Magnifica, which launched this summer. The convertible piece has two diamond collars with removable center brooch and tassel. This necklace is transformable and can be worn in multiple ways. Her other jewelry includes Bulgari’s high jewelry white diamond rings and fancy intense yellow diamond ring but it has been reported it’s a Bulgari piece that Zendaya owns. 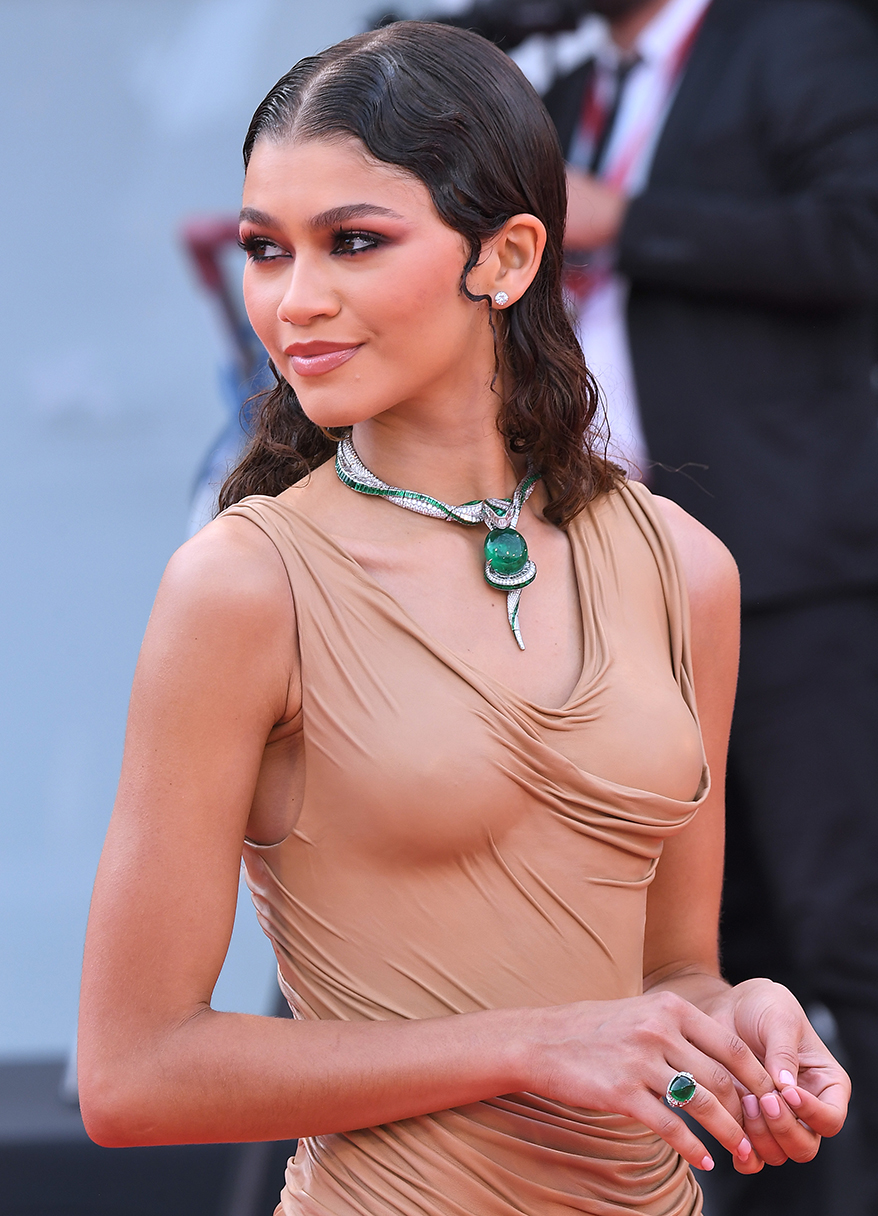 At the Venice Film Festival, Zendaya wore Bulgari’s jaw-dropping Emerald Serpenti necklace with a 93.83-carat cabochon Colombian emerald in the center which stole the jewel spotlight (above). It was massive but her nude color dress allowed it to stand out without overshadowing the delicate boned beauty. She also wore an emerald and diamond ring by Bulgari High Jewelry.

She also turned up the earring voltage at the 2021 BET Awards in Bulgari’s platinum and round diamond, pear shaped diamond and marquise shaped diamond mixed fancy cut earrings.

In the new Bulgari Viper campaign (above) she has serpents slithering around her wrist and fingers in different colors of gold and diamonds.

(Above) Recently Zendaya wore iconic Bulgari Serpenti Viper jewelry while attending a special screening of Dune at the Odeon Leicester Square in London. The award-winning actress was layered in multiple Serpenti Viper bracelets in white gold and diamond with matching rings, diamond stud earrings and a high jewelry yellow diamond ring for a TCW of diamonds of 48.25.

It is safe to say that when Zendaya wears it, international millennials will take notice. And they will want to imitate this icon, like Elizabeth Taylor’s fans wanted to imitate her.

Just a little history, in case you don’t know who she is, Anna Magnani was a brilliant Italian movie star who purchased her Bulgari jewelry for herself – long before self-purchasing was in vogue. She was the receipent of the Best Actress Award for her role in the film version of Tennessee William’s play The Rose Tattoo.

To paraphrase what Babi said, “Bulgari jewels are an ode to the bold and fearless women” … all of them throughout time.

Advertisement
Related Topics: celebrity jewelryFeatured
click to Comment(Comment)
Up Next