Goldsmith Gallery Jewelers radiates the ambience of an elegant lodge, complete with a fireplace.

SCOTT WICKAM DRIVES a sleek, coal-black Dodge Viper that — except for nature’s whims — could belong to one of his customers. The sports car was a drawing prize. Goldsmith Gallery Jewelers would have picked one spectacularly fortunate name from among registrants at the store if the temperature had reached 100 degrees in Billings, MT, by Aug. 16 last year.

Wickam, the store’s founder and owner with his wife, Kelly, was making a major wager with the car. Previously owned by celebrity magician Criss Angel, its price could top $70,000 at auction. And Billings has recorded 100-plus temperatures seven of the last 10 summers.

Wickam won that wager, a dramatically successful marketing campaign at a store built for drama. The Goldsmith Gallery Jewelers building stands on its own parcel of a growing retail and dining complex at the Billings’ Shiloh Crossing. The Viper sat, gleaming, each day, a photo opportunity in front of the building.

“So many people came to take selfies with the car,” Wickam marvels. “We had a huge July and August. It was funny how many people wanted to see the Viper. It was successful way beyond our expectations.”

Those who came inside to register for the drawing had another treat in store. Water trickles down one stone wall of Goldsmith Gallery Jewelers to radiate a fresh, outdoor ambience and simultaneously keep the arid Montana climate at bay. Two-story expanses of glass and cedar-framed oversize windows flood the store with sunlight, showing off the “Big Sky” of the state’s nickname and the nearby Beartooth Mountains.

The center of the showroom is atrium height, with a suspended mahogany framework of lights that doesn’t interfere with its open-space feel.

Almost all the building materials came from local resources, with sustainability a priority, Wickam says.

In the past two years, Wickam has added some freestanding cabinetry so customers and salespeople can move with ease around entire cases.

Within the building’s 7,500-square-foot space he’s added a “man cave,” a side room with TV, beer and wine. A “gold mine” room allows youngsters to watch cartoons or test themselves on Wii games. Around its walls, painted to replicate a mine shaft, roam the seven dwarfs of the Snow White fairy tale, loading Goldsmith Gallery carts with treasure.

“When I started my business, my wife and I had to do our shopping with our kids, and I remember that,” he said. “The room is really popular — sometimes we can’t get the kids out of there.”

Goldsmith Gallery Jewelers radiates the ambience of an elegant lodge, complete with a fireplace. That reflects the outdoor life of its customers: miners, cattle ranchers, oilmen, visiting skiers from nearby Red Lodge Mountain Resort.

“Someone may come in here in a camouflage jacket and boots and spend $100,000,” Wickam said. Not surprisingly, one of its 2014 promotions offered a free rifle and scope with the purchase of diamond jewelry.

Diamonds are popular here, as are stones mined in Montana, so rich in stones and metals its official nickname is The Treasure State. Montana’s Yogo sapphires are called the most valuable in the world because of their natural color.

“They’re not heat-treated, so they are that nice blue color coming out of the ground,” said Wickam, whose website features them prominently. The Yogos have become expensive, however, rivaling diamonds in price and generally being mined in sizes less than a carat, so the store is seeing a growing market for other Montana-mined sapphires.

For Goldsmith Gallery Jewelers, the location has been as important as the building. Wickam said he had been watching the growth in south Billings and bought the property nearly three years before he built. He had to hold the land through two years of recession before his 2010 groundbreaking. That’s Wickam’s style.

“I’m one of those planners who’s always thinking for years down the road,” he said. 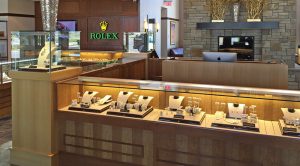 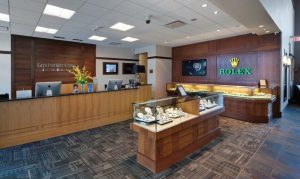 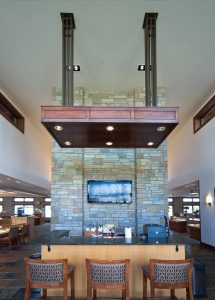 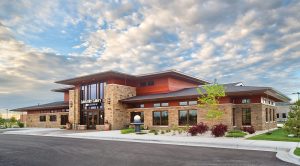 1. GLASS HOUSE, GOOD VISION.  Wickam says he gets raised eyebrows from people who think glass invites theft in a jewelry store. But his staff can see everything that’s going on outside, thanks to those expansive windows. They’re prepared: “I’ve got 44 cameras, which may be a bit of overkill for Billings, Montana,” he conceded.

2. LOVE INSIDE AND OUT.  Goldsmith Gallery gives new employees what it terms a “clothing budget” to encourage a professional look. The store also shares percentages on the sales with all staff, not only the salesperson. “Whatever they sell in front is because they’ve had support in back,” Wickam says.

3. WELCOME TO THE ’HOOD.  When sporting goods store Scheels opened in Shiloh Crossing, Goldsmith Gallery Jewelers partnered with it last August in a welcome promotion: a rifle-and-scope gift to customers who purchased $2,995 or more in diamond jewelry or loose diamonds. Timing was involved: Deer and antelope hunting begins in September.

4. GROUND FLOOR IN SOCIAL.  Goldsmith Gallery Jewelers boasts more than 17,000 likes on Facebook, a result, Wickam says, of getting into social media early. The store has found that women in particular are followers and offers incentives: quizzes such as which tone of sapphire they prefer. There are giveaways to respondents, with the winner’s name featured on the page; of course, that’s likely to be shared, too.

5. TRUSTED EMPLOYEES.  “I’d hired a manager from a Jared store and he said he could handle the LeVian trunk show,” Wickam says. “So I let him do it. I went out and played golf. And he sold $190,000 worth of jewelry.”

Related Topics: Goldsmith Gallery Jewelersjewelry stores in Montana
click to Comment(Comment)
Up Next

From 11 Feet Wide to 11,000 Square Feet, This North Carolina Store Has Become the State’s Largest