WHEN GREGG KELLY told customers he was planning to redo the Albany, NY, location of Northeastern Fine Jewelry, they inevitably asked him, “Why are you spending money on a store that still looks beautiful?”

But Kelly, vice president and son-in-law of owner Raymond Bleser, understands the importance of updating a store’s look and making it as functionally modern and approachable as possible. He invested untold hours studying store design, traffic flow and consumer behavior before embarking on the major remodel he undertook in 2017, which went far beyond a touch up or a new coat of paint.

In fact, the store was gutted, all while it remained open, with the support of its two sister stores in Schenectady and Glens Falls, NY.

What’s new? A 1,000-square foot addition, the floor plan, the cases, a glass façade, a patio and landscaping. Even the parking lot is new.

“We try to redo the stores every 10 years, and some stuff was falling apart,” Kelly says. “When a customer visits a few times a year, we want to re-engage them and give them a new environment, a new experience.”

The company realized a 15 percent increase in business the first full year following the renovation.

In preparation, Kelly painstakingly considered every detail and collected sources of inspiration from around the world, making it a priority to visit stores when he travels.

He also reads the Robb Report and other national luxury magazines to stay on top of retail trends. He took a class with neuroscientist Robert Cooper, a New York Times bestselling author and business strategist specializing in consumer behavior. Kelly was particularly interested in what gives people the ability to make good, conscious decisions based on the retail environment itself. “Once you have their attention, it comes down to the associate who guides the decision to purchase.”

To get their attention, Kelly wanted the store to have an open floor plan and optimal traffic flow while balancing the individual requirements of a variety of international shop-in-shop brands with less of a choppy look.

Michael Roman of the C2 Design Group says the overall challenge was to take Kelly’s concept and bring it to life within an existing building.

The sense of openness was achieved by repositioning the entry and shifting it over, which also affected the exterior of the building. The goal inside was to improve traffic flow, so shoppers could feel comfortable, meandering freely without encountering any obstacles. “It’s the experience that’s going to bring you back,” Roman says. The shop-in-shops are tied together with materials and lighting, while accommodating each vendor’s own design criteria.

The glass facade offers a transparency that puts shoppers at ease as they approach. Especially at night, the window reveals the character of the store within, Roman says. And the casual patio setting in front offers a decompression zone between parking lot and shopping experience, easing threshold resistance.

Finishes are sleekly upscale and timeless, rather than trendy.

Kelly also told Roman he wanted a store that looked like it had leaped off the pages of a luxury magazine. Accordingly, finishes are sleekly upscale, but timeless rather than trendy. Decor includes shades of gray and imported European leathers. LED lighting is new, green and efficient. Roman describes the materials used in the interior as the bow on the design package — timeless, clean and relatively simple, designed to complement the design without overshadowing it or being too understated.

Kelly put himself in the shoppers’ shoes when it came to details.

“We changed a lot of different things as we went and I always kept the consumer in mind. Even things like how they experience walking through the parking lot, the pitch of the sidewalk, and the feel they get when they step out of their car,” says Kelly.

“We researched for hours how to get the right thing — from handicapped signs that weren’t run of the mill, to the garbage can, to the outside rugs, to the extension of the awning over the front door to give them enough space for their umbrella, so they’re not getting wet when they get into the store. I studied the music, the rocks we used outside and the flowers we put into the planters to make sure the scent is appealing.”

While all of this was going on, by far the ultimate challenge was that the full-service jewelry store remained open, to the extent that it could, one section at a time, while chaos was kept at bay.

“The biggest challenge was to make our employees comfortable, as well as our customers,” Kelly says. “We sectioned off parts of the building so we didn’t lose too much consistency. Every part was gutted. We did all right, too, and our customers were great to us. They still shopped and stayed loyal. We were able to move things from store to store and still fulfill their needs.”

Ray Bleser, who founded the company, was happy to leave the renovation project to Kelly.

Originally, Bleser had studied to be a pharmacist, planning to follow in his father’s footsteps, but after just one day in that professional role, he knew it wasn’t for him. Instead, he decided to pursue his hobby of collecting and selling rare coins and gold.

Northeastern Coin Gallery opened in 1980 and quickly expanded in scope, becoming Northeastern Fine Jewelry by 1985. In a twist of fate, the company’s flagship location in Schenectady, NY, occupies the building that once housed the drugstore where Bleser’s father worked.

Bleser has given his son-in-law his seal of approval. “He’s stationed in Schenectady, and every time he comes in, he says this is the nicest store from here to New York City,” Kelly says. “It’s a real modern look that’s attractive to all age groups. You get a New York City feel combined with a hometown experience, and I think that’s hard to accomplish.” 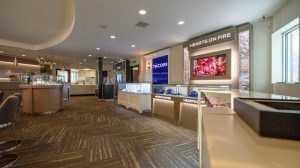 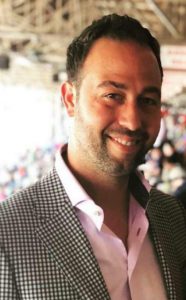 1. The Diamond District edge. Northeastern Fine Jewelry has an office in the Diamond District of New York. “We’ve never been one to just order stuff and ship it in. We like to look at things ourselves and have the first pick of diamonds. We’re picky when it comes to buying. And it gives us a nice edge to pick out what we want and pass those savings on to the consumer based on our buying ability,” says Kelly.

2. Training is top of mind. The company sends staff for training provided by its top brands and invests thousands of dollars a year into additional education. The expectation of expertise extends beyond sales to custom design and the repair shop. There’s also a watchmaker on staff.

3. A respect for jewelry history. They plan for an estate sale every year. “We try to keep our roots and the things that made us who we are today. They’re fun, too, because you get to look at things that are older and helped develop the jewelry industry for what it is today,” says Kelly. “And it’s fun to sell one-of-a-kind, rare things and tell the story of how it became what it is.”

4. Making marketing a priority. “Traditionally, the jewelry industry markets for six weeks leading up to the holidays; we work hard to have a consistent approach to educating the consumer,” Kelly says. “We’re marketing 12 months out of the year.” Marketing is about 30 to 35 percent digital, and the website recently became set up for e-commerce.

5. Promotional savvy. In 2017, Northeastern sponsored a contest to win the opportunity to propose in a live commercial aired during halftime of the Super Bowl on FOX. The winner was featured in People Magazine, the Daily Mail in the UK and the New York Times. They also sponsored a half court shot during a Siena College basketball game; the contestant made the shot and walked away with $25,000, leading to intensive coverage from ESPN.

When updating your store’s appearance, consider function as well as form and put yourself in your customer’s shoes. Imagine you are the consumer approaching the building. What is the experience like? Is there shelter from rain? Are curbs accessible? Is there space for seating? Can they tell what kind of a store they will be entering? Have you provided a decompression zone between street and store?

Related Topics: Featuredjewelry stores in New York
click to Comment(Comment)
Up Next

Chicago Retailer Harks Back to History While Pushing Boundaries in Design, Art and Events