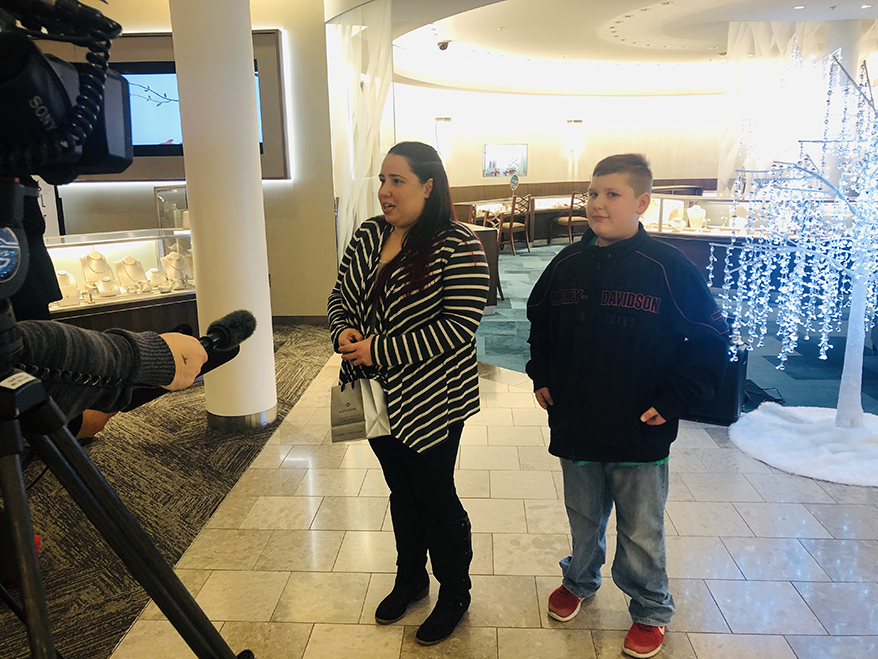 (PRESS RELEASE) OMAHA, NE – A Council Bluffs, IA, woman has her young son to thank for her new $5,000 diamond ring. Eleven-year-old Adam McKinney asked his mom to ring bells with him for The Salvation Army this holiday season. After a four-hour bell ringing shift at a Council Bluffs Hy-Vee, mom Jennifer McKinney was automatically entered in Borsheims Big Ring contest. Monday, Jennifer was announced as the winner of a 14k white gold round diamond ring that retails for $4,950.

The Borsheims Big Ring contest is in its fourth year. The contest, in partnership with The Salvation Army, has successfully helped increase the number of bell ringers in Omaha and the surrounding communities during The Salvation Army’s Red Kettle campaign. All bell ringers who fulfilled at least one 2-hour shift during the holiday season were entered into the contest.

Borsheims President and CEO Karen Goracke and Major Adam Moore from The Salvation Army presented the ring to McKinney and her son in front of a crowd of cheering Borsheims employees and customers. In addition to running the Big Ring contest, Borsheims also encourages its employees to sign up for bell ringing shifts across the city and supports The Salavation Army year-round.

McKinney says she already has a diamond ring but plans to keep this one and wear it on another finger. And, she noted, it was a perfect fit! A photo of McKinney and her son talking with the media after receiving the ring is attached.

Borsheims Fine Jewelry and Gifts is one of the nation’s largest independent jewelry stores and a proud member of the Berkshire Hathaway family. With an international clientele spanning 50 states and six continents, Borsheims continues to operate with the vision that has guided the company for more than a century: “We are privileged to share in the special moments in our customers’ lives. We will treat this opportunity with the respect and importance it deserves.”

For more information about Borsheims, contact Jaci Stuifbergen at (402)951-8215 or [email protected]

A User Manual For The Boss? It Could Really Help

How Much Do Celebrities Actually Influence Jewelry Clients? Our Readers Weigh In