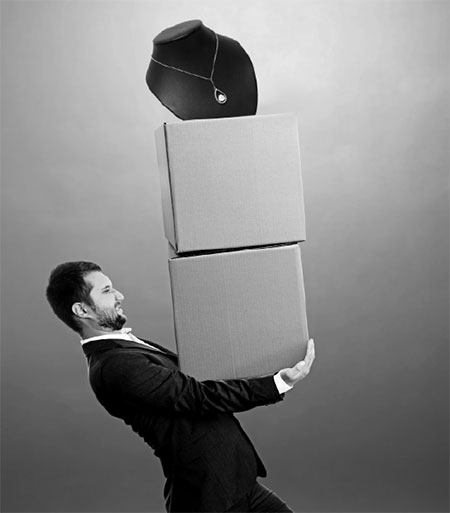 I hate breaking down our cases every night. Do you have any tips to shorten the drudgery?

You’re not alone. This is one issue on which nearly all jewelers are united: Setting up and pulling jewelry from cases is a pain. Still, empathy won’t secure your inventory, or appease your insurer in the wake of a smash-and-grab. We asked the INSTORE Brain Squad what they do and the best approaches involved teamwork, a detailed routine with everyone following specific tasks, magnetic displays or custom-built floorboards that could be removed whole from the cases, and carts, ideally pushed into walk-in safes.

“Jewelry carts are a must. We use the carts you can buy at Costco for storage; they are taller and have longer shelves, not to mention a fraction of the price of the ones made for the jewelry industry,” said Dorothy Retzke, owner of Krystyna’s Jewelry in Chicago, IL.

Tim Ottmann of The Gem Gallery in Reno, NV, said a custom-built system had allowed his team to lower his store’s case-pulling time to less than 10 minutes. “We had cases designed to remove entire trays of jewelry, so nothing gets overhandled, and the trays get placed on baker’s racks, and wheeled into the vault. Takes seven to eight minutes for our entire 1,800-square-foot store!”

Joseph Delefano at Regency Jewelers in Rotterdam, NY, said having the same people set up and break down helps, “as repetition creates a faster process.” Still, the bottom line is there is no escaping this task. “It’s a P.I.T.A!” said Tom Duma of Thom Duma Fine Jewelers in Warren, OH. But in toil there’s always company. “We use the time to talk and build team unity.”

What do you think of using legal templates? Do we really need a personal relationship with a lawyer?

There’s an old saying that if you don’t have enough money to pay a lawyer, you don’t have enough money to be in business. All businesses are unique and it’s just too important a part of running a company to be left to the generalities of a template you pull off Google. Now, for the truly simple, small, mom-and-pop operation that’s just starting out, you may be OK with a do-it-yourself approach — at first. But if you are expecting a lot of growth in the future, or to take on staff, an off-the-shelf approach will only lead to problems down the road. This is especially so if there are partners or shareholder agreements. As business attorneys are fond of saying, “You can pay your attorney now or pay him a lot more later.” Find a good lawyer and start building a relationship.

What kind of return can I expect from renovating my interior?

Ruth Mellergaard, principal of GRID/3 International, a New York-based interior design firm, puts the figure at a “conservative 10 to 15 percent,” adding that anecdotally she hears from clients that they find it much easier to sell higher priced goods following a full redesign. The bottom line is when you offer an appealing environment for people to shop, they will stay longer and buy more. A professionally designed layout also allows you to better control the shopping experience, drawing attention to the pieces you most want to sell. Hard numbers aside, we can reliably say if you’ve haven’t updated your interior in the last five years, you’re almost surely missing out on sales.

With expensive goods, is it smarter to be focused on gross margin dollars or to try to maintain a target profit margin?

It is true that as you head up the price curve you have more flexibility to give in a little on a request for a price break; as the old adage says, “you can’t bank percentages; you can only bank dollars.” And trade groups like the Platinum Guild International include such thinking in their standard advice for retailers. That said, the real issue for most retailers, is that they give in too easily on requests for discounts, cautions David Brown, president of the Edge Retail Academy. “Most salespeople capitulate far too easily and too quickly,” he says, adding that his group works with sales associates to teach an array of tactics to fend off bargain hunters’ initial forays and to provide alternatives to discounts such as value-added offers. There are other factors at play that could affect your decision on whether to accept a lower profit margin, such as your store’s location or the level of local competition, Brown says. “But when a store-owner has exhausted all of our negotiating strategies, we tell them not to let the client leave and take their money to the opposition,” he says.

Related Topics: display casespricingstore design
click to Comment(Comment)
Up Next

IIJS Premiere 2021 to Be Organised In Physical Form In Bengaluru

Follow This Formula to Calculate Return on Investment (ROI) in Marketing