CAN YOU MAKE a living on a profit margin of just 12 percent? Did the word no come to mind? You’re wrong.

For coin or bullion dealers, 8-12 percent gross profit margin is the norm, and they make a lot of money with little debt.

The “magic triangle” includes profit margin, inventory turn and inventory level. The combination of all three tells your future in a store, how much money will be left over to pay all bills and have money in the bank.

Let’s take a simple store math example for a year using keystone. A typical jewelry store would have a net profit of 5 percent. Here’s how a P&L would look: 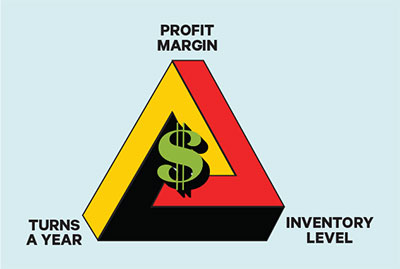 Are you making money? Absolutely. Do you have any money left over after paying expenses? Depends.

Imagine if last year, you sold everything at Christmas, not a stitch of inventory left. January 2nd, you fly to New York with three suitcases and buy the $250,000 of inventory that the cost of sales above pays for. You’ll have no debt. If something sells within six months, you have the money to reorder the replacement for the case, thus always having a stocked showcase.

Now assume the same figures above, but instead of three suitcases costing $250,000, you bring five suitcases and bring back $600,000 of inventory for the store. Same sales and profit numbers as before. Did you make a profit, make money? Yessiree Bob! Do you have money? No! You bought $100,000 more inventory than the sales you took in. So how do you pay for it?

In this scenario, your inventory is $350,000 higher than the cost of goods sold. Divide cost of goods by inventory level, and it shows you have a 0.41 turn. A turn of 0.41 means this store has more inventory than needed for two years.

So, what’s the secret to having money?

The long and short of it is, if you’ll keep your inventory levels approximately equal to the gross profit dollars you’ll make over a year, you’ll both make money and have money.

The lower the profit margin, keep inventory lower, or if you must have a higher inventory level at lower margins, then turn it faster. Instead of taking 12 months to sell it, sell within nine.

It takes all three for The Magic Triangle to work magic in your store!

What You Can Learn About Turn from Clothing and Furniture Stores

David Geller is a 14th-generation bench jeweler who produces The Geller Blue Book To Jewelry Repair Pricing. David is the “go-to guy” for setting up QuickBooks for a jewelry store. Reach him at [email protected].