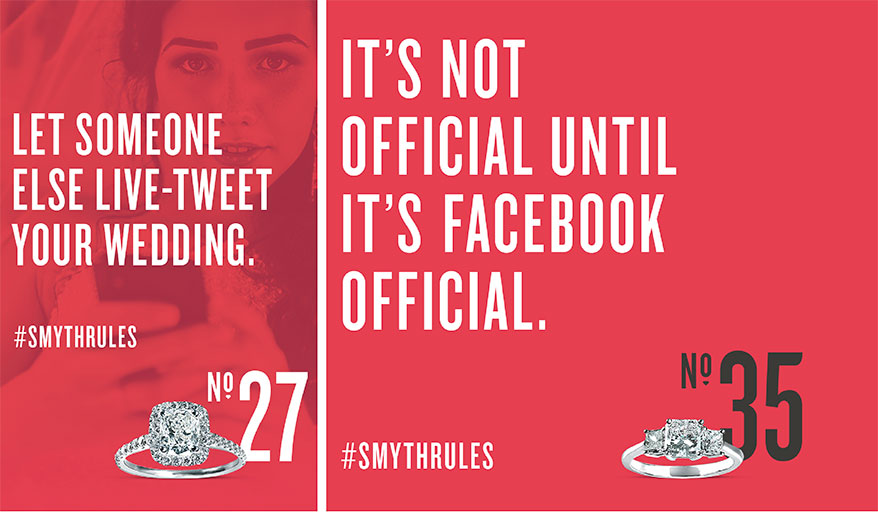 Millennials make a big production out of getting engaged, thanks to the easy availability of video and social media, but they aren’t as enamored of traditional rituals, says Howe Burch, co-president of TBC, the agency representing Smyth Jewelers.

The solution? An interactive ad campaign called “The Rules of Engagement.”

Dos and Don’ts Rooted in Humor

The “Rules of Engagement” campaign, designed by TBC and Smyth, is designed to make young bridal shoppers smile and identify with Smyth, which should get them thinking about the ring.

Their ads feature 50 rules — the dos and the don’ts — of the contemporary engagement journey, from sharing Netflix passwords to the token social media post announcing the proposal. Rooted in humor, wit and real-life scenarios, “New Rules of Engagement” reflects the changes in how millennials navigate relationships, how they receive and share information and how they make purchase decisions, the team says.

Rule No. 9: Get down on one knee — because two is begging.

Rule No. 32: Marriage proposals should never include emoji.

Rule No. 47: Rings hidden in champagne flutes are a choking hazard.

“Millennials have spurred a total shift in relationship ‘rules’ across the board, whether it’s spending three months’ salary on an engagement ring or waiting until a couple is married to live together,” says president Tom Smyth. “This campaign reflects those changes and speaks to how the proposal process is now a very personal yet public, festive event.”

Taking the Campaign to the Customers

Each rule can have its own ad campaign, and the campaign itself can become an interactive viral phenomenon, too, inviting millennials to come up with their own rules. Smyth launched six videos to start with, but has the potential of creating mini-campaigns around each of 50 rules.

“Millennials are elusive. It’s not as easy as running a television commercial and hoping to find them,” Burch says.

Instead, the campaign goes to them, with “Rules of Engagement” coasters placed in the venues they frequent. Select bars throughout downtown Baltimore, Ellicott City and Annapolis will also carry coasters with a blank space that invites patrons to write in new rules, then snap and upload a photo to social media using hashtag #SmythRules for consideration to become an official rule.

In addition, Smyth is sponsoring local events and programs including social sports leagues and a concert series at Canton Waterfront Park. The rules also appear on outdoor advertisements, in-store signage and on the radio.

It Keeps Them Relevant

“It’s a fun way to engage with the brand in a tongue-in-cheek way that hopefully they will like and talk about and, at the end of the day, come in and buy an engagement ring,” Burch says. The campaign highlights the progressive nature of Smyth, which is a 100-year-old family-owned and operated company determined to keep up with retail trends.

Do It Yourself: Consider Your Customers

Related Topics: Best of the BestINSTORE September '17jewelry stores in MarylandMarketing
click to Comment(Comment)
Up Next

Lifetime Warranty is a Competitive Edge for Wisconsin Jeweler