Lawrence, who specializes in bridal jewelry and high-end watches, found a fun way to break down those threshold barriers on a Saturday with, of all things, a social-media-friendly tattoo contest to introduce the jewelry line King Baby.

Lawrence considered it the perfect complement for King Baby, which he describes as having an edgy biker look. In addition, he surmised that people who like to adorn their body with works of art would also find a deep personal connection with jewelry.

“We are what would be called a guild jeweler, and we are always trying to look for ideas that are more on the casual side,” Lawrence says. “Most of our events in the past have been black-tie or at least more traditional.” Yet Bloomington, IN, is a college town where students make up a significant percentage of the 100,000 population.

He called the event Tacos, Tequila and Tattoos.

Once he had conceived the idea, Lawrence worked with his affiliated marketing experts on getting the word out. The store placed flyers with a Harley Davidson dealer and biker bars, along with a bevy of print and social media marketing created by Porte Marketing. The event was also promoted with a radio campaign orchestrated by Roy Williams.

Those who shared their tattoo stories defied any stereotypical expectations. “It was a much more diverse crowd than I would have expected,” Lawrence says. “We had people in their 60s and 70s with tattoos. Some people had full sleeves.

Several people had investments of $10,000 or more in tattoos.

“The event was very inclusive of our community and yet brought in a different demographic for us. It was a way of gaining new customers and having people feel more comfortable. Without question, 90 percent of the people we saw that day were new faces.”

After the event, the marketing team invited others among the tattoo-clad Bloomington population to share photos and stories of their tattoos on Gold Casters’ social media, continuing to give participants $25 gift certificates and also selecting an online winner by Facebook vote, who was awarded another $250 gift certificate.

The stories behind the tattoos turned out to be fascinating, Lawrence says, and in all about 100 people shared their stories in store or online with photos or videos.

King Baby is known as a men’s line, primarily, which the store needs, but it also has the magical versatility of being unisex. “We turned our entire investment in the line,” he says. “We sold all of the highest-end pieces we had in stock.”

The event attracted media coverage on social channels, on the radio and in the newspaper. “It was very well received by the community. People are still talking about it today.” 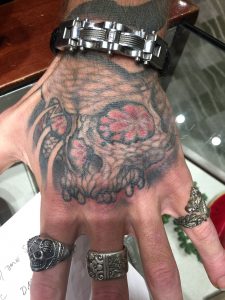 Related Topics: jewelry stores in Indiana
click to Comment(Comment)
Up Next

This Jeweler Set Up Shop In Grand Central Station

How To Make Money With an In-Store Estate Buying Show