QUestion: What do you estimate COVID-19 will cost you financially in 2020? 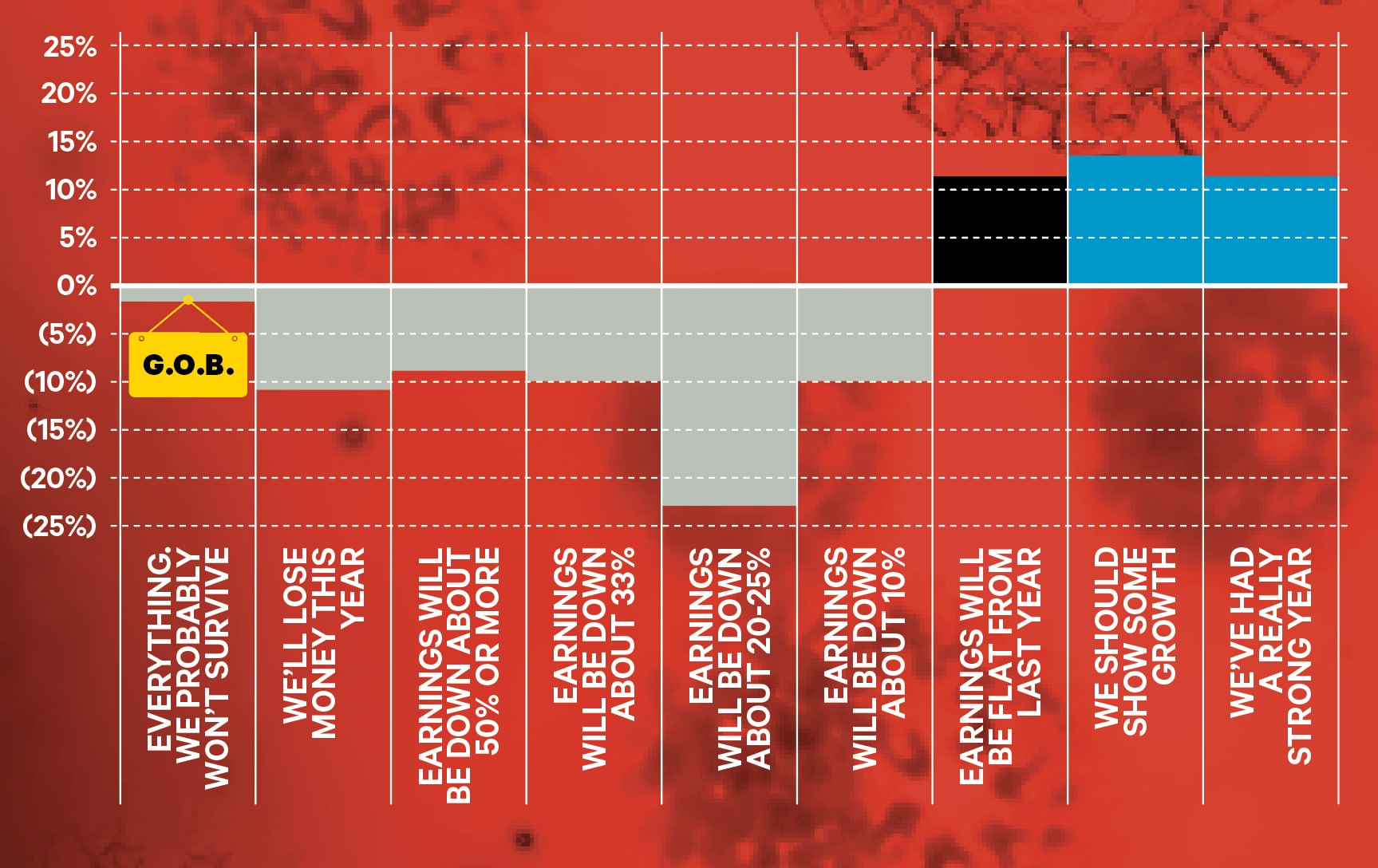 NEARLY TWO-THIRDS OF the jewelers who took our 2020 Big Survey expect their earnings to contract this year because of the economic havoc wrought by the COVID-19 pandemic.

About 1.5 percent of the jewelers said they didn’t expect to be able to survive much longer if conditions didn’t quickly improve, 11 percent said they’d had to borrow money or dip into savings to keep their doors open, while about four in 10 estimated their earnings would decline by between 20-50% compared to 2019.

Not everyone was doing it hard. About a quarter of the almost 600 jewelers who answered this particular question in the INSTORE 2020 Big Survey said they expected to show some growth, with about one in 10 saying they’d had a “really strong year.”

Those thriving jewelers stood out in several areas: They tended to come from smaller markets, they reported that a “substantial” amount, or between a quarter and a half, of their income came from e-commerce, they were slightly more likely to sell lab-grown diamonds (59% vs an average of 52%) and they were more likely to be active in buying gold off the street.

For most independent jewelers, however, 2020 will go down as a year to forget.

In addition to the loss of earnings, one in three said that 50 percent of their inventory was now a year or more older, suggesting they faced a constrained cash flow situation in the future.

The jewelers who answered the survey, all owners or managers of independent jewelry stores across North America, cited lockdown-related orders as the single biggest factor that had hurt their stores’ financial performance, followed by general health fears, which had kept people from shopping.

Despite the grim numbers, a large majority of the jewelers remained positive and described the health of their business as either “very strong” (17%) or ”strong” (46%).

Asked what they hoped to achieve in 2021, they listed their top three goals as growth, boosting profitability, and clearing that old inventory.

For more insights into the state of the independent jewelry market, be sure to look out for INSTORE’s 2020 Big Survey in the upcoming November edition.

These Are the Top Jewelry Brands of 2020, According to the Big Survey

VDB is Now the Largest Marketplace for Lab Grown Diamonds

America’s Coolest Stores: Before You Start

America’s Coolest Stores: Get Your Contest Entry in Great Shape