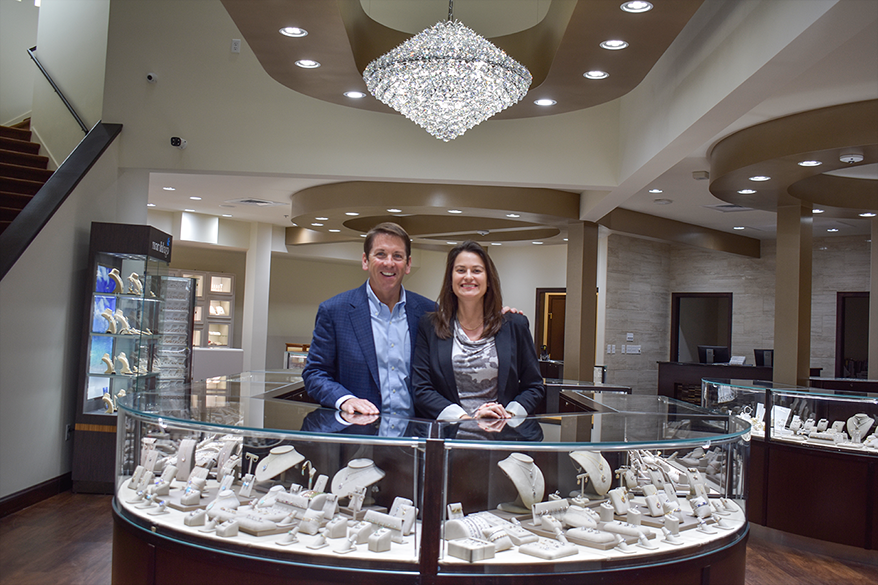 Todd and Jill Ferrante in their elegant new store in West Ocean City, one of two they own in the area.

JUST IMAGINE HOW cool it would be to associate your business with the most popular activity in your community.

In Ocean City, MD, the beach, of course, is the focal point. And Park Place Jewelers’ Atlantic Avenue store commands its own share of attention in its prime spot on the boardwalk.

Along with diamonds, bridal and high-end branded jewelry, owners Todd and Jill Ferrante offer a wide variety of sea-life and nautical jewelry, particularly in their beach location — everything from sterling silver souvenirs to an exquisite, one-of-a-kind diamond mermaid piece. “We have to appeal to everyone,” Jill says, since everyone walks past on the boardwalk, even kids looking for souvenir charms.

They support myriad charities, from Coastal Hospice and the American Cancer Society to the Worchester County Society. And they have immersed themselves in the community by supporting local charities, hosting an annual Treasure Hunt at the Beach, and setting up pop-up shops during renowned fishing tournaments. The Treasure Hunt at the Beach has raised $25,000 over seven years for a children’s charity.

Here’s how it works. Participants donate $20 for the chance to dig in the sand for buried treasure, and everyone is let into the fenced-off area at the same time. Treasure ranges from loose gemstones and finished jewelry to the grand prize of diamond earrings. The treasure itself is not on the beach — little black treasure bags containing a tag describing the prize are buried about 4 to 6 inches under the sand. Odds are good; a maximum of 100 participants dig for 50 prizes, some of which are donated by their vendors or sold to them at a discount.

Treasure hunters can use only their hands to dig; no shovels or rakes. “We don’t want to make it too hard for them,” Jill says. “But they tell us in some cases it’s the hardest workout they’ve ever had, moving sand around for 15 minutes or half an hour!”

“Participants love it,” Todd says. “Once you find one prize, you take your prize up to the store, give the tag to the sales associates and they give you the prize.”

If all the prizes aren’t located within about 30 minutes, Todd launches into a trivia contest for the few remaining prizes.

This is the kind of contest that promotes itself. It’s listed as one of the weekend events on the city’s website. “A lot of people check that website when they’re coming into town,” Todd says. “We’re usually sold out before Saturday even gets here.” The hunt takes place once on Saturday and once on Sunday. Participants must register in person and make the donation in advance. It’s covered by the local newspaper and TV stations. People can watch the hunt from their balconies.

The event initially had to be approved by the mayor and city council.

After five years, though, it was considered established and only an annual permit renewal is required. Local sponsors sell refreshments along the boardwalk. “People have fun doing it and a one out of two chance of winning, all to benefit a charity that is close to everyone’s heart,” Todd says. “Being in business means giving back to the community.”

Advertisement
Related Topics: jewelry stores in Maryland
click to Comment(Comment)
Up Next

This Retailer Combined Diamonds with Donuts for a Sweet Event

The Most Powerful Button On Your Phone, and More Tips for July