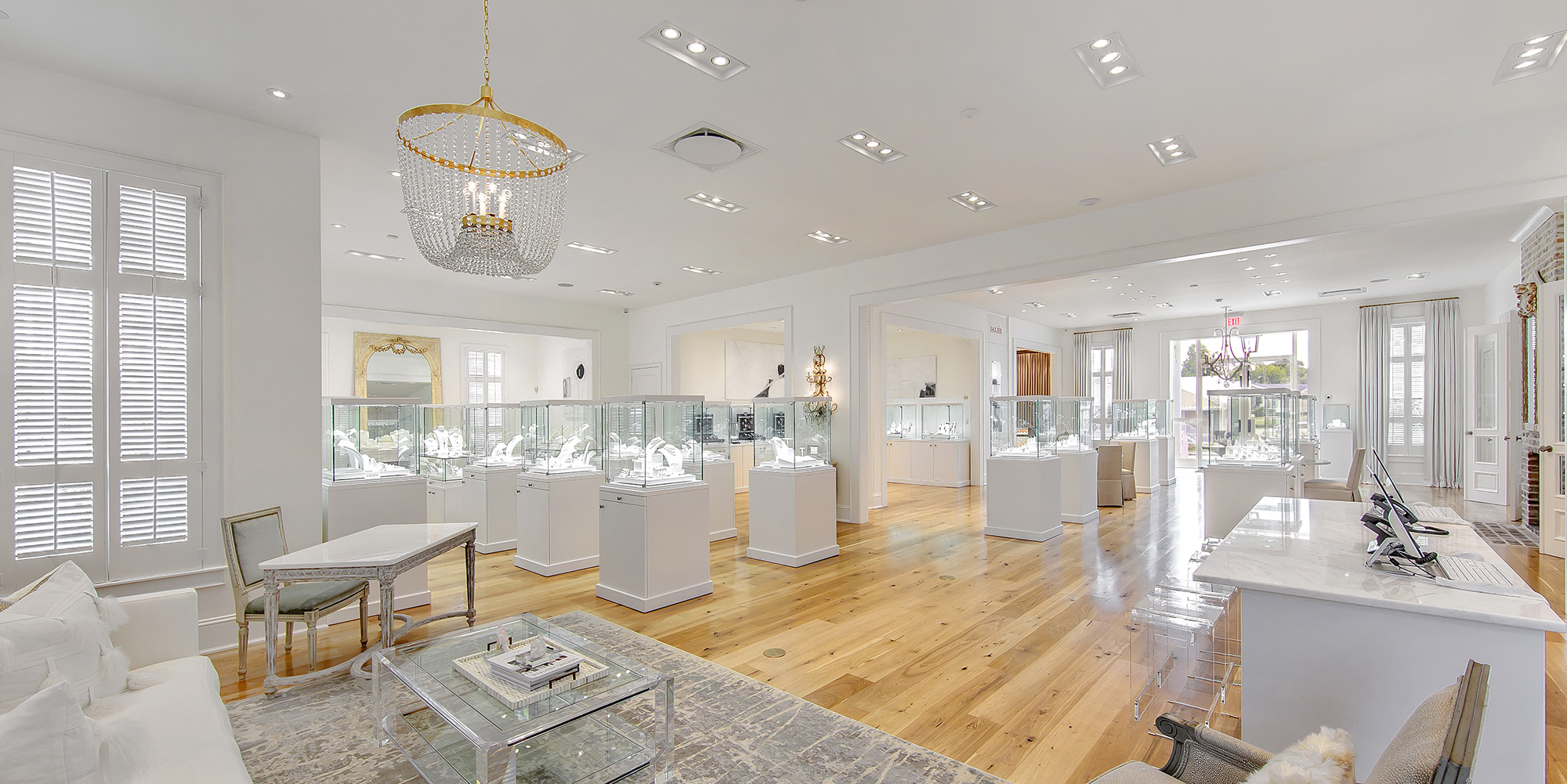 The Fakier family creates a museum-quality retreat customers would be happy to call home.

AT THE HEART of Fakier Jewelers in Houma is an international love story.

When Louisiana-native Greg Fakier met his wife, Montreal-born Manon Phaneuf, in Switzerland at a school for young jewelry-store owners, it quickly became clear that they belonged together.

Naturally, there were some obstacles to overcome. Manon spoke French and Greg spoke English, with very few words in common. But love won out over language. “To make it work, he has to be your soul mate,” says Manon — now, of course, fluent in English, with an intriguing inflection that is part French-Canadian, part Louisiana. “Her teacher told her that she would never learn English,” her husband says. “He was wrong! The accent is the best part of her English.”

Manon had planned to take over her father’s jewelry store one day, but once she met and then married Greg, she found herself worlds away from Montreal. Greg says Manon brought great taste to his family jewelry business when she joined the operation in 1983. In addition, she brought knowledge of an ahead-of-its-time inventory control system her dad had developed, which helped the Fakier business grow and thrive.

Greg’s grandfather, George Fakier (pronounced Fa-Kay) had founded the business in 1928, selling jewelry first from a briefcase and then a very small storefront alongside a clothing store. In 1967, George moved the business into a renovated 4,300 square-foot former movie theater. George died in 1977 and Buzzy, his son, died just 18 months later in 1979.

Greg was just 17 when he and his younger brother, Glenn, were faced with the decision of whether or not to succeed their father, Buzzy,  in the business. Somehow, it felt natural to commit to that, even as a teenager. “There was some infatuation with the jewelry business, just being brought up in it,” Greg says. “I don’t think we had anything else on the horizon that we had locked into. So we said, ‘Why not?’”

While the boys learned the business, their mother, Lois, and two aunts orchestrated the transition and held it all together, even after a devastating robbery. “Mom was the glue,” Greg says. “And she still comes in every day.”

Sadly, Glenn died suddenly in 2004. Greg, Manon and Lois continued to work in the renovated theater, all the while envisioning what they’d like a future store to look like. “We tried to make this more of a home, a museum and a jewelry store mixed into one,” Greg says.

It’s hard to imagine a museum — or a jewelry store for that matter — that feels comfortable enough to move into, but that is precisely the feeling that the new Fakier Jewelers evokes. Airy, light-filled rooms with high ceilings, soothing neutrals predominated by white, and sophisticated furniture inviting enough to sink into all conspire to give the illusion of a high-end home. “I wanted you to be able to come in and sit down, have a cup of coffee and feel like you are home,” Manon says. “I wanted comfortable, but elegant. Now clients say, ‘I would move here to live.’”

After years working in a space that had its drawbacks — one of which was that Manon, who worked behind the scenes in an isolated cubbyhole of an office, couldn’t even see the sales floor or the customers — they decided it was time for their dream store, which took about two years to build. They grabbed the location in the heart of downtown Houma overlooking a bayou when it became available six years ago.

In their previous store, showcases created barriers between customers and staff. “We decided that in this store, we were going to be 95 percent shoulder to shoulder — and the customers love it. It’s an enjoyable experience to be on the same side of the counter with your customers looking at jewelry together rather than upside down,” Greg says. He also wanted some chairs on wheels, so that if a customer stopped to chat anywhere in the store, he could roll a couple of chairs over and offer them a seat.

They agreed it should be white and bright with color provided by accent touches and the jewelry itself. And they wanted it to fit in with its surroundings and to reflect the charm of Louisiana, while at the same time being different enough to create a local sensation. It was a tall order.

Manon compiled design ideas from photos she had seen and places she had visited, particularly New Orleans, Montreal and Paris, and then worked with The French Mix interior design firm of Covington, LA, to pull it together. “We wanted to bring a little bit of that French culture in the store,” she says. “I would take one picture of something I liked — like long windows in Paris — and another part I liked from something else.” The French Mix team understood her idea of blending antiques with comfortable seating for everyday function. “It’s a clean look and the focus is on the jewelry,” she says.

Emily Robin, design assistant for Jennifer Dicerbo of the French Mix, says while Manon loves antiques, she also wanted the space to be modern. “It has a classic French elegance with a crisp modern twist,” Robin says. Starting with a white foundation is an interior designer’s dream, she says, because it allows for endless options. “You can always layer on top of that with curtains and dark furniture,” she says. “Museums are primarily white because you want to focus on the art. Here, the art is the jewelry itself.”

It’s clean and pristine without being sterile; textures and draperies warm it up, dress it up and enhance its elegance. Plentiful natural light makes it inviting, too. A mix of warm and cool light makes diamonds sparkle like crazy, Greg adds.

Robin says the Fakiers didn’t want to cut corners in any way that would water down the experience; they wanted to “wow” the city of Houma, in which they are very well known. The furniture is a blend of antiques and pieces made especially for the space, including custom showcases. Most of the art was custom made by Greg’s sister-in-law, Cynthia Colis.

The chic, comfortable vibe even extends to areas shoppers won’t typically see, such as the sleek employee lounge, a luxurious departure from the typical break room.

“I’ve never worked with people who care so much about their employees,” Robin says.

She cites the example of both the break room with the full kitchen and comfortable seating, as well as the restroom, reserved for the staff and outfitted with a console, beautiful mirrors and an ottoman.

The new store attracts three to five new customers every day, who are nearly always inspired to exclaim, “Wow!”

“It gives us the opportunity to be the new hot thing,” Greg says.

1. CELLPHONE AUDIO TOUR: “My wife and I like museums, and when you go to a museum you can rent the audio tour, so I thought, why not in a jewelry store?” Greg Fakier says. The app is accessed from the store’s website and customers use their own phones, listening to descriptions associated with each display. It’s also a novel way to acknowledge the importance of mobile window shopping. “As far as the consumer coming in to learn about the diamond, nothing has changed except how they buy it. If you don’t embrace the Internet you’ll be left behind. The consumer now comes in with their phones in their hands, usually with something they saw on our website.”

2.WATERFRONT PROPERTY: The newly engaged are invited to attach engraved locks to a gate that encircles a pergola in back of the store and hurl the keys into the bayou. The idea was inspired by the tradition in Italy and France of attaching locks to bridges as a symbol of love. Customers who bought rings from Fakier in the past are invited to participate, too. Engagements are celebrated with Champagne toasts and sealed with locks in the romantic, waterfront spot.

3. JUST FRIENDS: Fakier says the business shies away from having a rehearsed sales approach. “We are here to help guide the customer in the direction to find what they want. These customers are not targets. We do not have a method. There are no approaches. We don’t believe in it. We don’t like it. We treat our customers as friends, which they are.”

4. SIGNATURE DIAMOND: Fakier has designed and patented a diamond called Momenti di Luce, which means “the moment of light,” offered in round, emerald, cushion and princess, as well as oval and pear on request.

5. FOURTH GENERATION: In 2011, the store welcomed Adam Courtney, a fourth-generation member of the family, who is the son of Greg’s sister, Susan. Adam is a bench jeweler and apprentice engraver.

Try This: Create a Text Club

Geoffrey Brown: On key with trends while still being authentic and personable online. Love how they incorporate their clients into their social media, making them feel a part of the brand.

Katherine Bodoh: I like the bright, open and modern feel of the store’s interior. It is very inviting and fresh. The exterior has a lot of large windows, which creates openness and natural light.

David Lampert: I like that they have their own diamond cut.

Related Topics: America's Coolest Storesjewelry stores in Louisiana
click to Comment(Comment)
Up Next