April data across our platform of same-store information shows a slight drop in sales achieved compared to April 2017. This month’s result of $103,546 comes in nearly 3 percent lower than last April’s $106,715. The average sale for April was $380, up from $364, an increase of approximately 4 percent, with a decline in units sold from 263 to 227. 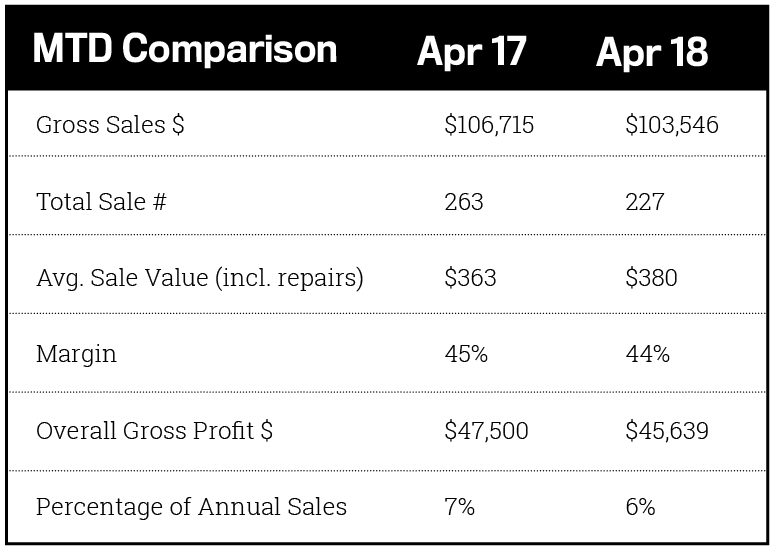 The decline in margin continues to be a cause for concern across many stores, with the data pool indicating a drop from 45 percent to 44 percent in monthly margin in just 12 months. Obviously one month represents a snapshot, but our other data has shown this to be a trend. Any average obviously has extremes, and there will be store owners who are encountering an even bigger decline than this. Every $1,000 of sales will translate into $10 less dollars of profits achieved purely from the lower margin, and thus the drop of 3 percent in sales becomes a decline of almost 4 percent in gross profit.

The same can be true in reverse. Helen’s store has seen her sales increase 10 percent, from $100,000 to $110,000. She has also managed to improve her markup from 50 percent to 52 percent. What effect does this have on her gross profit?

Last year’s profit of $50,000 has now increased to $57,200. Her 10 percent increase in sales has been accelerated to a 14.4 percent increase in her gross profit. Just two percentage points extra in margin gives her an extra 44 percent profit on those additional dollars.

It’s easy to view small percentage changes in margin as insignificant; a percent here or there would appear to have little effect on the outcome of a businesses profit. However, as the numbers show, the effect on the bottom line can be considerable. In Jane’s example, the extra margin has made a difference of $2,200 over what she would have made without it. Her $10,000 of extra sales has delivered $7,200 in extra profit by the combination of increased turnover and increased margin. She didn’t need the extra sales to get the margin benefit, but the two together create a healthy improvement on the previous year.

Increasing margin costs almost nothing to do, doesn’t require extra staff or product, and doesn’t require additional space. It doesn’t affect rosters or double the time spent having to clean. It offers an infinite return on money and time that virtually no other business improvement can provide. It can be the quickest and easiest strategy to implement, with the only true risk being that the customer may say no.

Unfortunately, many small business owners say no for the customers without giving them the chance to decide for themselves.

Don’t be this type of business owner. At least give your customers the chance to reward you more handsomely for what you already do.

Advertisement
Related Topics: David BrownFinance
click to Comment(Comment)
Up Next

Here’s How to Diagnose Your Business When Sales are Down

David Brown is the President of The Edge Retail Academy (sister company of The Edge), who provide expert consulting services to help with all facets of your business including inventory management, staffing, sales techniques, financial growth and retirement planning...All custom-tailored to your store’s needs. By utilizing the power of The Edge, we analyze major Key Performance Indicators that point to your store’s current challenges and future opportunities. Edge Pulse is the ideal add-on to the Edge, to better understand critical sales and inventory data to improve business profitability. It benchmarks your store against 1100+ other Edge Users and ensures you stay on top of market trends. 877-569-8657, Ext. 001 or [email protected] or www.EdgeRetailAcademy.com

27 New Engagement And Wedding Rings Making People Say “I Do”

Tease Out the Secret Skills of Gen Z Hires, Teach Sales Associates About Brand Incentives, And More Tips For June