This story was originally published in the October 2017 edition of INSTORE.

HOLIDAY OUTFITS appeal to some jewelry retailers and appall others, who consider them a slippery slope toward total tackiness.

To Jennifer Farnes of Revolution Jewelry Works in Colorado Springs, CO, dressing up is just not worth the effort: “Too busy to worry about that! Take a shower, wear clean clothes, survive Christmas,” she says. But Nicole Shannon of Keir Fine Jewelry in Whistler, British Columbia, says wearing tacky Christmas sweaters from a shop next door actually saves time, since staff members can grab sweaters from a communal bin on the run, rather than worry about their wardrobes.

Others swear by a show-off-the-jewels approach. “I encourage my staff to wear our jewelry during the holiday season,” says Marc Majors of Samuel L. Majors Fifth Generation Jewelers in Midland, TX. “It’s much more personal when it’s on someone and not a prop, and 99 percent of the time it closes the sale.”

Read on for a range of wardrobe ideas intended to break the ice with customers and bolster staff morale.

Edgy holiday-themed suits purchased from a company called Tipsy Elves make a statement on December Saturdays at Scott and Kelly Wickam’s store. “It actually made for a great selling day last year,” Scott,  at left, says. “It showed that we are not just stuffy jewelers trying to sell you something. We love what we do and we have fun doing it.” The suits cost $80 to $100 each. “For the money, they fit nice and look great,” he says.

For John Hayes of Goodman’s Jewelers in Madison, WI, it’s all about the ties. “I have a collection of holiday ties and wear a different one each day from Thanksgiving to Jan. 1. I always start with Charlie Brown and the Great Pumpkin.” He has 38 and counting, although some have fallen apart after 25 years of collecting.

Jennifer Hornik Johnson says the whole staff at Miller’s participates in the annual Ugly Sweater Party in December. The store offers a 10 percent discount to any customers brave enough to wear their own ugly items to the event.

Don’t Be Afraid to Live in the Past
Cornerstone Jewelry & Engraving, Palos Park, IL

At Cornerstone Jewelry & Engraving, owner Bryan Blaha and team believe “Old Jewelers Have Old Souls.” To enhance their theme, they ramp up their sartorial savvy for the holiday season with bow ties, vests, hairstyles and facial hair that evoke the early 20th century. “We tend to dress to the ‘9s,” says manager Ryan C. Karp. “Like the 1909s.” It leaves a lasting impression on clients, together with incense, old-school holiday music, classic decor and demonstrations.

Black is never basic at K Hollis Jewelers, where Karen Hollis, center, and her staff feel confident wearing their little black dresses for holiday events. “It shows a level of class that makes my staff get noticed,” Hollis says. “Jewelry really stands out on black, and it’s fun to wear a bigger diamond or more expensive items for holiday parties.”

“I made my sons dress up in elf outfits for an after-Christmas ad on TV,” says owner Alan Perry. In the commercial, Perry says he’s leaving the store till next year. His sons say, “We’ll show him! Come in now and get up to 50 percent off until Jan. 15!” Perry admits he had to pay his sons to be elves, though. 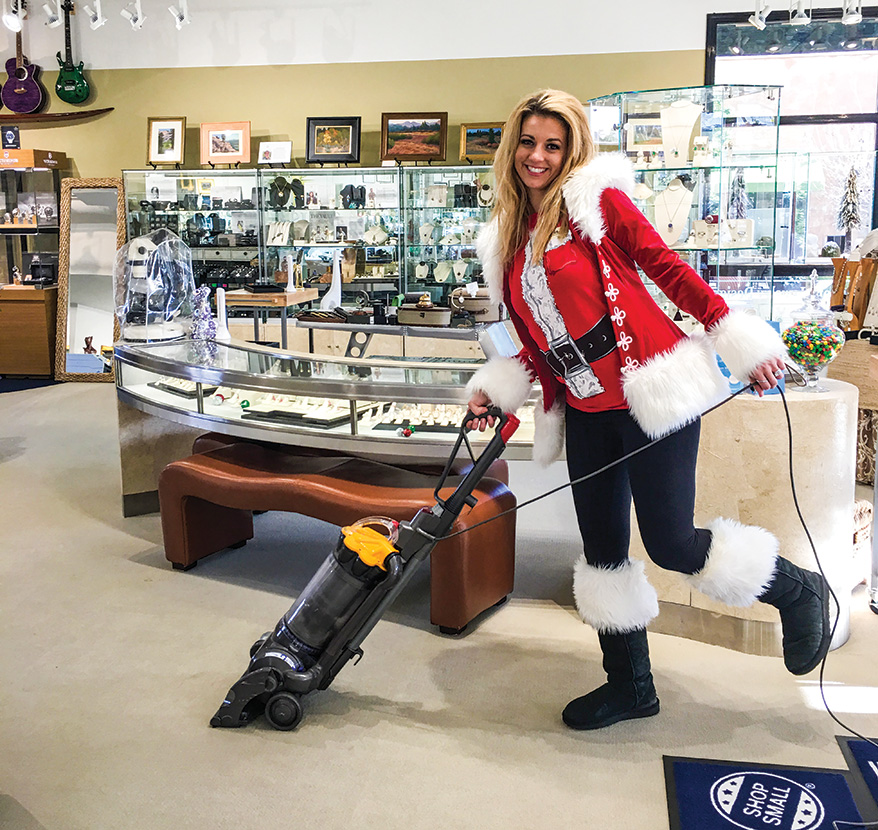 If You Are the Designated Elf, Be a Good Sport
Talisman Collection, El Dorado Hills, CA

Owner Andrea Riso isn’t above dressing up. “I look like a super giant idiot as an elf, but I’m a good sport about it because it makes sales spike and it’s fun.” Sales associate Becca Souders, pictured, picked up the elf outfits at Fredericks of Hollywood. “It worked, sales and morale-wise,” Riso says.

These Jeweler Direct Mail Samples Shine Bright for the Holidays

From Shoe Bling to Blueberry Props, This Is The Latest Stuff for Your Store

The Brain Squad Shares Their Thoughts on the Rapaport Price List