WITH JUST TWO days to go until Christmas Day brings down a red and green curtain on the traditional holiday season, independent jewelers appear on track to wrap up a largely successful sales period. The upbeat trends we have seen since Black Friday solidified in the last week. Thirty-one percent of jewelers said the 2019 holiday season so far had been a better than expected and a further six percent said it had been flat-out “terrific.” Thirty-three percent said it had been in line with their forecasts but those expectations had been noticeably bullish — the INSTORE Jewelers Confidence Index surged to a record high reading of 65 in November as many jewelers anticipated a strong December.

There were some jewelers for whom the period delivered a lump of coal with the portion describing their sales as “dismal” inching up to 8 percent in the last week. A further 22 percent classified their store’s performance as disappointing.

Still, that leaves a lot of merry jewelers.

“We have been humbled by the traffic. Lots of work earlier in the year has created an energy with our team and the customers this season,” said Brian McCall, owner of Midwest Jewelers and Estate Buyers in Zionsville, IN.

“Customers in a good mood. Lots of fun. Saw men for first time Saturday,” said Richard Frank, owner of Goldstein’s in Mobile, AL. “The next two days should be very good.”

Diamonds, including styles such as tennis bracelets and pins that haven’t been all that popular recently, continued to feature predominantly in lists of hot sellers, along with custom orders.

“The surprise of the year has been (diamond) pins,” said Jennifer Hornik Johnson, owner of Miller’s Jewelry in Bozeman, MT. “We’ve sold more than five brooches, which have been slow movers for YEARS!”

Credit for the strong season was attributed variously to God, the buoyant economy, the president, Boomers, and savvy year-long marketing plans, supported by loads and loads of hard work.

If there was one repeated refrain, it’s that while this Christmas period stood out for its healthy sales, it was also marked by a changing retail landscape. And you can expect more of that in 2020. In short, there’ll be no chance to rest on laurels.

“This business is a marathon of marketing, digital reinvention, and building goodwill. It is not won or lost in a single season,” noted Debbie Fox, owner of Fox Fine Jewelry in Ventura, CA.

Jennifer Farnes of Revolution Jewelry Works in Colorado Springs, CO, concurred: ”In 2020, ‘adapt or die’ will be the theme of the year. In the era of technology, ignoring the problem hoping it will pass won’t save anyone’s business. Hire a jeweler, advertise, update your website, and embrace custom.”

The fourth 2019 Holiday Season Mini survey was taken on Monday by almost 120 independent jewelers who are part of our Brain Squad readers group. 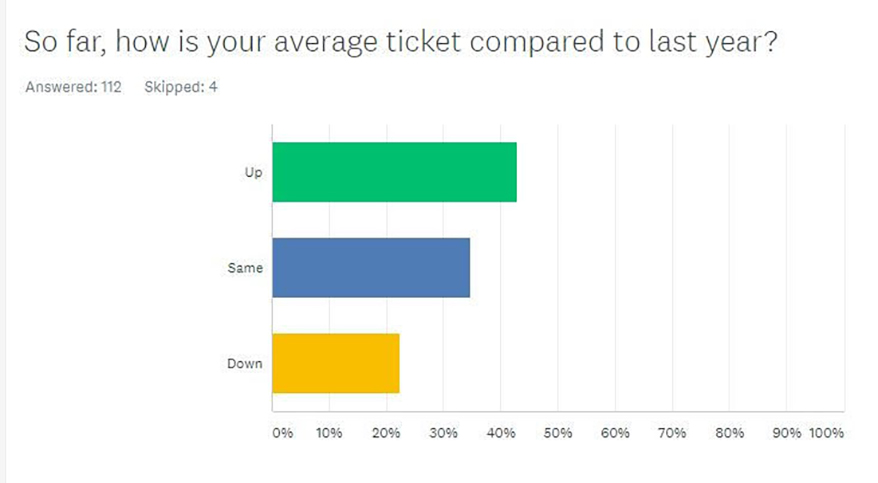 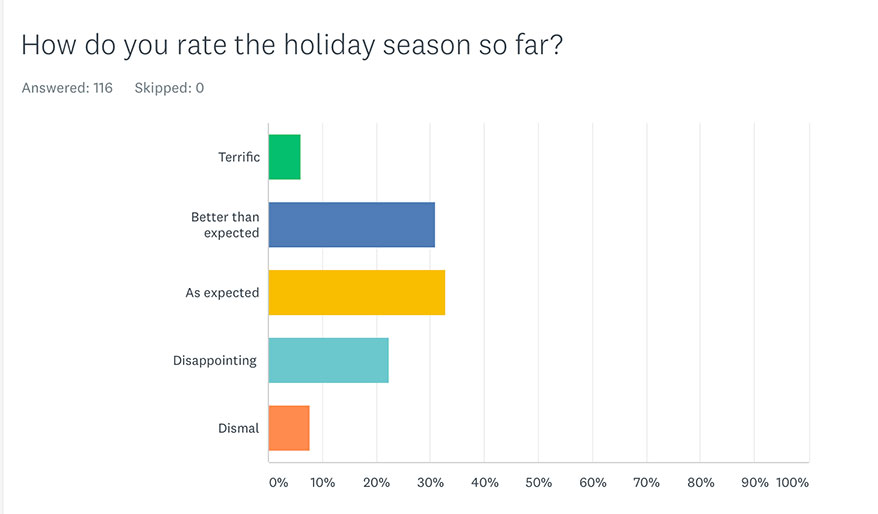 Related Topics: holiday business
click to Comment(Comment)
Up Next

Chairman of Hamilton Jewelers Dies at 86